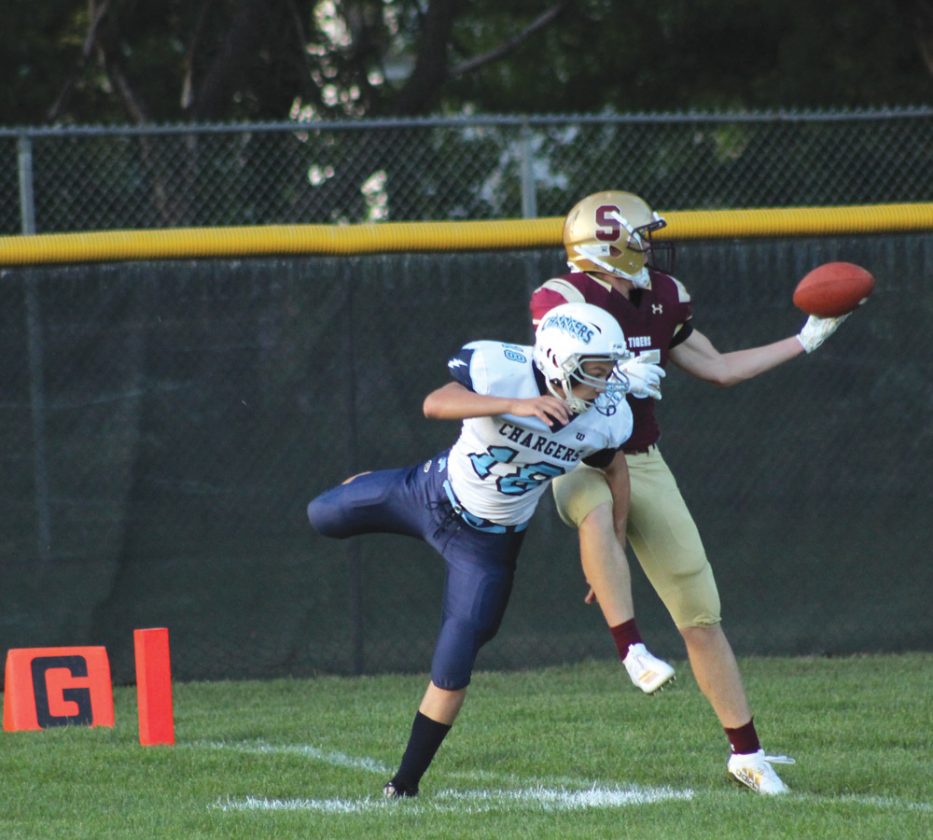 Staff photo by Travis Rosenau Springfield’s Jordan Toll tries to haul in a pass in the end zone as Minnesota Valley Lutheran’s Leyton Brau defends in the first quarter of Friday’s Southwest District, East Subdistrict football game in Springfield. The pass was incomplete.

SPRINGFIELD — The Springfield football team proved last season that it can score a lot of points.

Through the first two games this season, it is proving that again.

The Tigers blanked Minnesota Valley Lutheran 36-0 on Friday in Southwest District, East Subdistrict football action, improving to 2-0 on the year.

The Chargers fell to 0-2 on the year with the loss.

While Springfield’s offense gets plenty of credit, its defense is a big reason why the offense continues to find success.

“The defense played aggressive, intelligently and they all did their jobs,” Springfield head coach Bob Fink said. “When they do that with the great athletes we have, it’s going to be tough to move the ball on us.”

Curtis Tauer had two sacks for the Tigers’ defense, while Jordan Toll had a 15-yard interception return for a touchdown and Tate Mathiowetz had an interception for 65 yards.

While neither team scored in the first quarter, the Tigers got on the board 10 seconds into the second quarter with a 27-yard TD pass from Scheffler to Nolan Hovland for an early 8-0 lead after a Rummel 2-point conversion run. Rummel then barreled down the field on Springfield’s next drive and capped off the drive on a 1-yard TD run with 4:34 left in the half. Scheffler’s 2-point conversion run was good for a 16-0 Springfield lead.

Ivan Hovland added a 4-yard TD run less than two minutes later after Caleb Hauger blocked an MVL punt and recovered it at the MVL 4-yard line. The Tigers led 22-0 heading into the half.

In the third quarter, Curtis Tauer punched in a 1-yard TD with 7:32 left in the quarter before Toll’s 15-yard interception with 3:38 left in the third led to the final score. Both of those touchdowns were finished with extra-point kicks from Scheffler.

The Chargers lost starting quarterback Luke Thompson late in the third after Thompson came off the field limping after being tackled for a loss. Mason Cox entered at quarterback the remainder of the game in place of Thompson.

Midway through the fourth quarter, Cox had a 37-yard keeper to the right side, followed by a 26-yard run from Carlos Ramirez, but the Tigers’ defense stopped MVL at the Springfield 17-yard line to force a turnover on downs. The Chargers had another chance to score with less than a minute to play after recovering a Springfield fumble at the Tigers’ 31-yard line, but after rushing the ball to the 14-yard line, a throw to the endzone was picked off by Mathiowetz.

No Super Bowl Sunday is complete without chicken wings