GFW rolls all over Windom 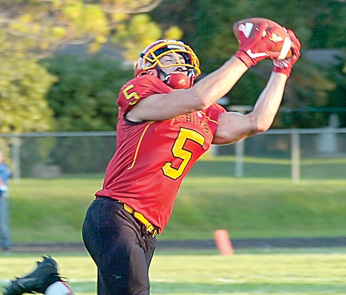 Staff photo by Steve Muscatello Gibbon-Fairfax-Winthrop’s Evan Martin makes a catch and would later score a touchdown on the play during the first quarter against Windom Friday in Winthrop.

WINTHROP — Gibbon-Fairfax-Winthrop scored on five of its first seven possessions to crush Windom Area 55-6 on Friday in a South Central District football contest.

In the first quarter, Evan Martin scored for GFW on a 41-yard run. Martin ran for the two-conversion and the Thunderbirds led 8-0.

The Thunderbirds took advantage of an Eagle turnover scoring on a 38-yard touchdown pass from Brody Hentges to Martin. Hentges ran the ball in for the extra points and GFW led 16-0.

Dominic Henrichs ran for a 29-yard touchdown for GFW in the second quarter. Henrichs tried to kick the ball, but it was no good.

JC Munoz ran 18 yards for a touchdown in the second quarter. Damian Hopp threw the ball to Evan Elder for two points.

Henrichs raced 60 yards for a touchdown as the second quarter was winding down. Hopp tried to run for the two-point conversion, but it failed. GFW led 36-0 at halftime.

In the third quarter, Ryan Lavrenz ran 40 yards for another Thunderbird touchdown. Hentges tried to throw the ball to Lavrenz for the two extra points, but it was unsuccessful.

Kade Sammons ran for the Eagle’s lone touchdown on a 14-yard run. Sammons tried to run for the two extra points, but it failed. GFW led 42-6.

Munoz ran 50 yards with 6:42 left in the third quarter. Henrichs tried to run for the two-point conversion, but it was unsuccessful.

In the fourth quarter, Jacob Rose scored GFW’s final touchdown when he ran 21 yards. Jorge Medrano tried to run for the two-point conversion but it failed.