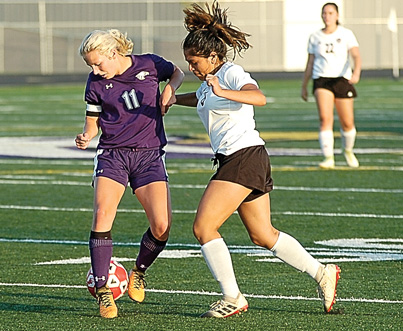 Staff photo by Steve Muscatello New Ulm’s Madison Roufs (11) plays the ball away from a Worthington player during the first half Thursday at New Ulm High School.

NEW ULM — In just her first season of varsity action, New Ulm’s Livia Reinarts is beginning to make a name for herself.

The sophomore attacker scored three goals in an 8-0 Big South Conference rout against Worthington. The three goals were the first of her varsity career.

“I’m feeling good, it’s really weird playing with them [the varsity] too,” Reinarts said. “It’s different, it’s definitely more of a challenge and it’s good to have a challenge too. It’s definitely a step up and it’s nice to have this opportunity to play with the varsity and be a part of the team.”

New Ulm’s offense was dominant for a second straight game, this time firing 43 shots on goal in the contest. The Eagles defeated Marshall 5-0 on Tuesday and they have taken advantage of their chances in the last two games.

“I think we’re pretty confident so far,” Reinarts said. “We’ve had a few tough games but we’ve a good team this year.”

New Ulm scored six goals in the first half to put the game away. In that first half, Madison Roufs and Paige Kalis scored two goals while Reinarts and Bryn Nesvold scored one each.

Roufs scored the game’s first goal at 34:58 after she initially fell down, got back up and kicked a left-footed shot past Worthington goalkeeper Chantel Peralta.

Roufs scored her second goal of the season at 19:25 and Reinarts scored her first career goal to put the Eagles ahead 5-0. Kalis scored before the break to make it 6-0.

In the second half, Reinarts added a pair of goals to give her three for the season. Kendra Nesvold stopped five shots for New Ulm (2-1-1), which travels to Faribault on Saturday.