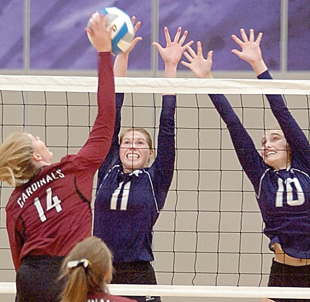 While Windschill had the majority of the kills and two ace serves in the first set for New Ulm, things opened up more offensively in the final two sets for the Eagles as they kept applying pressure.

“We always want to be more aggressive,” New Ulm head coach Stef Dietz said. “And we’re more versatile this year where we have a lot of people that can hit the ball, so we like to move it around as much as possible.”

The Eagles led 10-3 in the first set before the Cardinals (0-4, 0-3) closed the distance to 10-6 after three New Ulm errors and a lift. That was the closest Fairmont got the rest of the set, however, with New Ulm getting a 4-0 run right after and closing the set on a 5-0 run and an ace-serve set point from Windschill.

New Ulm carried its momentum into the second set and took an early 10-2 lead after a kill by Melby to force a Fairmont timeout. The Eagles pushed their lead to 20-8, getting an ace serve from Hoel and a kill apiece from Steffensmeier and Natalie Yackley along the way.

Yackley was 16 for 17 serving with seven set assists and five digs.

The Cardinals stayed with it, however, and climbed back to within 6, 22-16, after a 5-0 run that was littered with New Ulm errors. New Ulm snapped out of its funk and finished the set soon after, though.

Despite getting too comfortable at times like in Set 2, Dietz also said that she liked her team’s passing and offense and said that the serving was great.

The third set saw Fairmont take a 2-1 lead after back-to-back New Ulm attack errors, its first lead since leading 1-0 in the first set. Tied at 4-all, New Ulm got 3 consecutive points from Hoel, a kill and back-to-back ace serves, to lead 7-4.