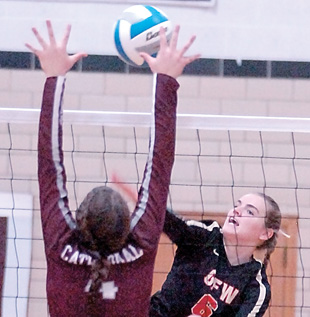 “As a team, we put together some good defense,” GFW head coach Chris Wortz said. “We had to change our line-up due to an injury, but we adjusted as the night went on, and we did a good job of controlling the game.”

GFW built a 17-5 lead in the first set. Cathedral made a number of miscues throughout the set. The Thunderbirds earned the winning set point on a Cathedral service error.

Both teams played things close during the first half of the second set. There were three ties and two lead changes. GFW regrouped and started to pull away from the Greyhounds. An unforced Thunderbird error brought Cathedral to within four points at 20-16. GFW’s defense dug its heels and pulled away. Shelby Ramirez’s spike won the set.

The Greyhounds refused to quit. They kept coming back when down and held a lead early in the set. Cathedral earned a point when GFW knocked the ball out of bounds for a 7-7 tie.

GFW put together a 5-0 run to regain both the advantage and shift the momentum back to it. Cathedral hit the ball out of bounds twice, had two unforced errors and GFW was able to drop the ball between some Greyhound defenders.

The Greyhounds were able to get within 3 points at 18-15. Cathedral’s woes continued and GFW outscored it 7-4. Lily Franta was unable to return the ball which gave the Thunderbirds the final set point and the match.