Madelia ekes by BLHS with 22-20 victory 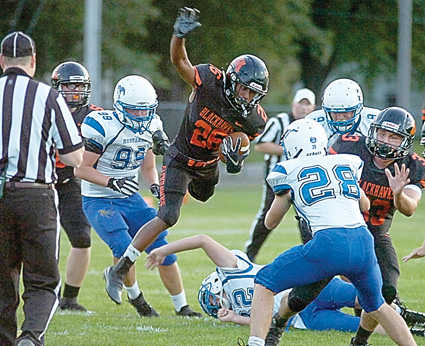 Ja’Sean Glover saved the game for Madelia when he intercepted a BLHS pass with 1:01 left in the game.

Alex Hennis took the ensuing kickoff return and he pitched the football to Zamora, who took off and scored the 80-yarder. The Blackhawks tried for 2 points on a run, but they were unsuccessful.

BLHS quarterback handed the ball off to Zachary Rueber, who scampered 14 yards for a Mustang touchdown to give BLHS its lone advantage of the game of 20-16 in the fourth quarter.

BLHS kept the pressure on the Blackhawks when it put together a drive to start the fourth quarter. The Mustangs scored on a 3-yard run by Cale Luthens. Luthens handed the ball off to August Bergstrom, who scored the extra 2 points, making it 16-14 in favor of Madelia.

Rueber scored on a 7-yard run in the third period. Rueber tried to run the ball in for the extra 2 points, but he was stopped by the Madelia defense. The score was 16-6 for the Blackhawks.

In the first quarter, Madelia took advantage of a Mustang fumble. On the first play from scrimmage, Ethan Arndt tossed a 13-yard pass to Nick Chloros with 5:28 remaining in the quarter. Arndt tried to pass to Luke Hennis for the 2-point conversion. The pass was incomplete.

Near the end of the first quarter, Ramiro Zamora took the football, started up the middle and cut back across the field for a 55-yard touchdown run with 10.5 seconds left in the first quarter. The Blackhawks ran the ball in for 2 points, making it 14-0 Madelia.

The biggest play of the game occurred at the 3:06 mark of the second quarter. BLHS’s defense forced Madelia to punt. The punt pinned BLHS deep in its own territory at the 2-yard line. Luthens tried to pass, but the Blackhawk defense pressured Luthens to run. He was trapped in the end zone for a safety. The result was a 16-0 advantage for the Blackhawks.

“We can put points on the board,” Madelia head coach Nick Willaert said. “But, we have to keep our focus longer than just a half.”

Willaert observed that Madelia played sloppy in the second half, which resulted in BLHS taking it to the Blackhawks.

“We need to focus on what we have to do.”

Madelia will travel to Edgerton on Friday.