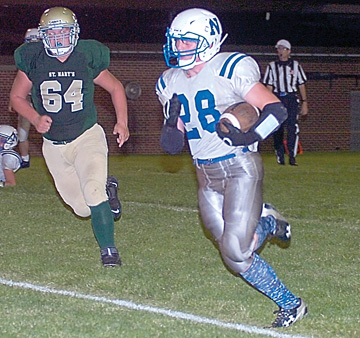 It was the first game of the season for both teams.

“We know that they would run the ball, and we found a way to keep them off balance, Nicollet head coach Tom Murphy said.

He called his team “a great group of kids.”

The Knights scored first. They took advantage of a Nicollet penalty and Nick Labat scored on a 1-yard plunge. The PAT failed and St. Mary’s led 6-0.

Nicollet responded when Jon Mans threw a 4-yard touchdown pass to Riley Hulke. Mans tried to kick for the extra point, but the St. Mary’s defense blocked it, making it 6-6.

Jon Mans tossed a 17-yard touchdown pass to Riley Mans with 17.6 seconds left in the first quarter. Mans tried to kick for the extra point but it went wide left, giving Nicollet a 12-6 lead.

St. Mary’s fumbled the ball and Nicollet recovered. The turnover was a costly one because Jon Mans threw a 24-yard pass to Avery Northquest at 8:24 of the second quarter. Mans’ pass to Shane Stevensen gave the Raiders a 20-6 lead.

St. Mary’s Nick Labat took the ensuing kickoff and he ran it back 80 yards for a touchdown. Carson Domeier kicked for the extra point for a 20-13 score.

Jon Mans ran 17 yards for a touchdown with 4:26 left in the second quarter. The Raiders went for a 2-point PAT, but it was unsuccessful.

“We are disappointed. We need to get tougher and we made a lot of simple mistakes,” St. Mary’s head coach Brent Kucera said. “It was a hard-fought game.”

For Nicollet, Jon Mans was 18 for 31 for 210 yards with three touchdowns. He also rushed 13 times for 50 yards and one rushing touchdown.

St. Mary’s (0-1) will play at Lanesboro on Friday, while Nicollet will host Cedar Mountain on Friday.