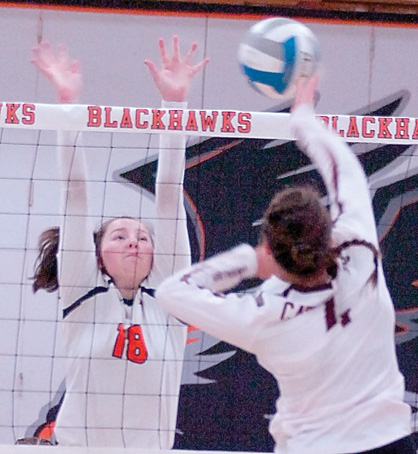 MADELIA — With a solid start from freshman Sydnee Helget and an aggressive all-around attack to go with it, New Ulm Cathedral started its 2019 volleyball season with a quick 25-3, 25-14, 25-8 nonconference volleyball sweep of Madelia to move to 1-0 on the season.

Helget, a freshman middle hitter, came up big for the Greyhounds on the night with eight kills and five ace serves in her first start on varsity.

“I thought she did well, she really came around at the end of the last year and just the improvement over the summer,” Cathedral head coach Becky Wilfahrt said of Helget. “Yeah, she did a nice job, she put the ball in play and she’s got a nice block up front.”

The Blackhawks (0-1) had trouble finding their footing right away, trailing 5-0 in Set 1 after a kill by Sarah Mohr and an ace serve by Maggie Fliszar. After getting a point on a Cathedral attack error to trail 14-3, it was the Greyhounds from there out, ending the first set on an 11-0 run for an early 1-0 lead.

Fliszar ended the night with seven kills, while Gabby Rohlik had 11 set assists for Cathedral.

Madelia was led by Brooke Lensing, who had two kills and a block. Emily Stevenson had seven set assists for the Blackhawks, while Dora Facundo had seven digs.

The Blackhawks committed several errors in the first set, but things weren’t made easy for them either, with the Greyhounds continuing a strong attack that carried through all three sets.

“I thought we moved the ball around well, we got a lot of hitters involved and I liked our aggressive serving,” Wilfahrt said. “That was one thing we talked about, we were trying some aggressive serving, Lily Franta went on a nice run here at the end, and those are just things that we’ve been working on, just getting them to try it in a game.”

It was more of the same for Madelia in the second set, struggling to get much going as the Greyhounds took an early 15-6 lead after a 5-0 run and a kill by Fliszar. Errors continued and the Greyhounds took advantage of it, closing things out and getting the set point on an ace serve from Mohr.

Madelia led early in the third set, 4-3, after an ace serve from Jovana Cortez and a pair of Cathedral attack errors, but things changed in a hurry soon after as the Greyhounds stormed back to finish the set and match after a 22-4 run.

Mohr, a top attacker for the Greyhounds last season in the middle, was forced to play more on the outside on Friday night to fill in for a missing player. Even with the change, she finished the night with a team-high 12 digs and 10 kills and had a few ace serves to go with it.

“I wish we would have got her the ball a little bit more in the middle,” Wilfahrt said of Mohr. “Right now we’ve got a player out, so she’s got to fill in in the outside positions, so that’s a little bit different for her, but overall I thought she did well. She did what I expected her to do.”