Worthington gets past New Ulm in Big South 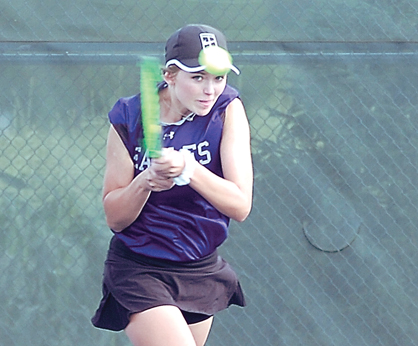 NEW ULM — While the New Ulm girls’ tennis team had a tough time overall Thursday and fell in its home opener against Worthington 6-1 at New Ulm High School, No. 1 singles player Makiah Otto continued a strong start to her season with a 6-2, 6-2 win over Kessey Aljets.

Otto won her singles match against Redwood Valley this past Tuesday 6-0, 6-2, and continued to see success on Thursday, getting a strong boost from her forehand and mixing things up along the way.

“My serves, I didn’t double fault at all, so that was good,” Otto said. “And I think the part of my game that was the best was my forehand. I had some pretty good lobs when she ran up the net, and yeah, it was pretty fun playing her again since I played her last year.”

Otto, a sophomore, said that she enjoys the step up in competition from No. 2 singles to No. 1 singles this season, but she still has early nerves. Nerves certainly didn’t get the best of her Thursday, however, as she came back from being down 1-0 in both sets to earn the two-set sweep.

“I’m excited for tougher competition, but I get a little nervous,” Otto said. “But I’m excited for season. I’ve been working all summer, I’ve got some new techniques and stuff, so it should be a good season.”

Coming close to picking up a win for New Ulm was junior No. 2 singles player Abby Hietala. Ivy Jenson beat Hietala 6-2, 5-7, 10-6. Also coming up a set short for the Eagles was No. 3 singles player and sophomore Malia Emerson. Marah Darling topped Emerson 1-6, 6-3, 10-8.

In doubles action, New Ulm’s No. 1 doubles team was missing Lauren Mages, forcing a switch and Gabby Sammons to bump up to team with Bethany Janssen. Cynthia Souksavath and Maggie Putnam then swept Janssen and Sammons 6-1, 6-4 in No. 1 doubles.

The Eagles next travel to Marshall for a 4:30 p.m. match on Tuesday.