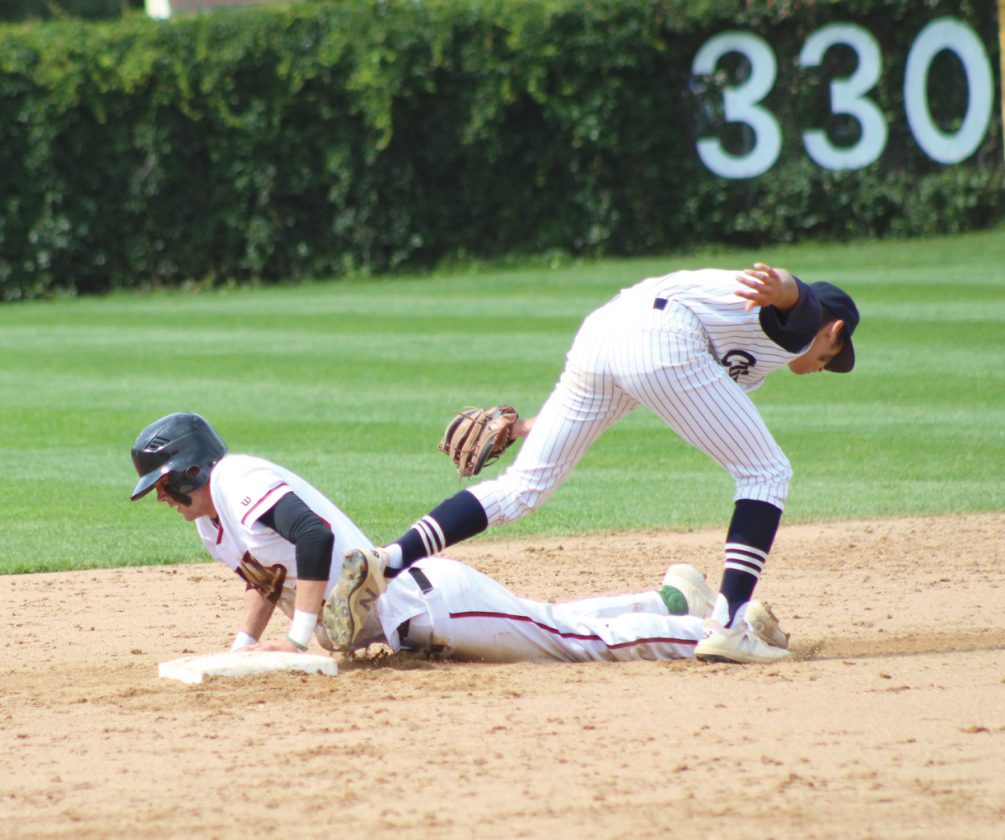 Staff photo by Travis Rosenau Stark’s Nick Labat beats the tag and swipes second base safely after a ball in the dirt at home plate on Sunday in Delano in Minnesota State Amateur Baseball action against Watkins.

DELANO — Left-handed starting pitcher Matt Geislinger held the Stark Longhorns to just one hit while striking out 19 for the Watkins Clippers on Sunday, leading his team to a 2-0 shutout win in the Minnesota State Amateur Baseball Tournament at Delano Municipal Baseball Park.

With the loss, the Longhorns end their season with an 18-12 record, while the Clippers move on to an 11 a.m. meeting with Morris on Sunday in Delano.

Longhorns manager and right fielder Dusty Mangen said that his squad knew what to expect going up against Geislinger and that they would have to make every opportunity on base count, something that the Longhorns tried to do but couldn’t Sunday.

“We don’t have a guy like that in our league,” Mangen said of Geislinger. “Just his mechanics, it’s tough to pick up. We’ve got three guys in the middle of the lineup that are left-handed and he’s a tough guy. We said going into the game that we were going to have to attack because he probably wasn’t going to walk you, had to go up there and swing the bat.

“We knew the first couple times around, it was going it be tough just because we knew what he has and we knew we never saw it before. We figured if we could ride it out for as long as we could, we could hopefully get some better swings on him late. It didn’t really materialize too much, but he’s a good pitcher.”

Geislinger only allowed one walk and hit Mangen with a pitch in the seventh.

Zach Haala had Stark’s lone hit, a leadoff single in the bottom of the first.

Jon Kopacek took the loss for Stark in eight innings, giving up seven hits and five walks for one earned run while striking out five.

“Jon, right away he started off shaky, he wasn’t commanding the zone, but once he got locked in, you really could tell he was back to his normal self,” Mangen said. “One thing about him is he’s unflappable. We had a couple errors, couple guys on, trouble with control, but he was always minimizing the damage and that’s what he does.”

Nick Altermatt, a draftee from Lamberton, pitched a scoreless ninth for Stark.

The Clippers scored their lone two runs in the first after Kevin Kramer first got on with a leadoff single up the middle. Lincoln Haugen then reached first on a fielding error by Stark second baseman Tim Seifert. Stark had another error during the same play on the throw to first, which allowed Haugen to scramble to third.

After a lineout to Seifert, Brenden Ashton drove a two-run double to left to give the Clippers the early lead that they never lost.