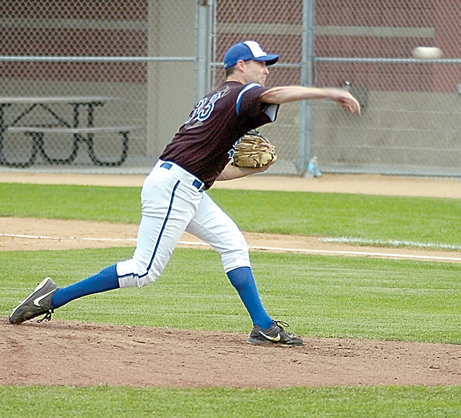 NEW ULM — Judd Davis’ sacrifice fly with the bases loaded and one out in the bottom of the 10th inning scored Brody Peterson from third and lifted the New Ulm Brewers to a 5-4 win over Springfield in a Region 2C playoff game Friday night at Mueller Park.

Mitch Kelly got the win in relief for the Brewers, who clinched the No. 1 seed out of Region 2C for the Minnesota State Amateur Baseball Tournament.

Kelly pitched 2/3 of an inning in relief of starter Mitch Bockenstedt, who went 9 1/3 innings and allowed four runs on 10 hits and fanned 11.

Isaac Fink took the loss for the Tigers in relief of starter Jevan Richert. Richert allowed three runs on 10 hits in 7 2/3 innings of work.

Decker Scheffler led the Tigers with three hits including an RBI triple.

For Brewers’ manager Al Flor, the game came really came down to two at-bats in the late innings.

In the ninth with the Brewers trailing 4-3, New Ulm loaded the bases with no one out. But Fink struck out the next two batters and had Sam Berg in a 1-2 hole and within one out of staying alive in the 2C playoffs.

But on the next pitch, Fink uncorked a pitch in the dirt that allowed Ranweiler — who had doubled earlier in the inning — to score to tie the game at 4-4.

“He has a great breaking pitch,” Flor said about Fink. “But he will spike it every once in a while and he did.”

The Brewers then set the stage for the win in the 10th when Peterson reached on a one-out error and Hoffmann laced a double. Wade French was intentionally walked to load the bases for Davis who delivered.

“I could not have asked for a better guy to have at the plate than Judd,” Flor said.

Springfield manager Steve Helget said that he was pleased with the play of his young team.

“We had a lot of young pitchers out there in Jevan and Isaac, we had four players on the team who just graduated from high school. But we had to win this game to stay alive after Stark beat Lamberton 3-1 Friday.”