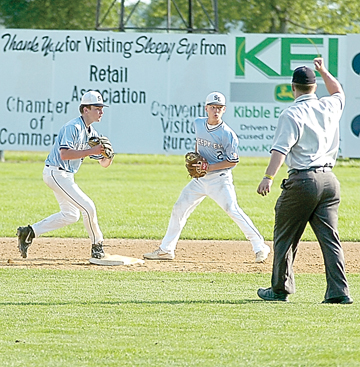 Staff photo by Steve Muscatello Sleepy Eye VFW shortstop Jackson Huiras (left) steps on second for an out after catching a line drive. He then threw the ball to first doubling off a Hutchinson baserunner for a triple play during VFW playoff action Thursday in Sleepy Eye.

SLEEPY EYE — Struggling to make strong contact at the plate while struggling to find the strike zone from the mound hurt Sleepy Eye VFW Post 800 in a District 2, Southwest Subdistrict playoff game against Hutchinson VFW on Thursday as Hutchinson topped Sleepy Eye 6-1 to move on in the winner’s bracket.

The winner of the 5:15 p.m. loser’s bracket game between the Mankato Royals and Sleepy Eye on Friday will take on Hutchinson later in the night around 7:30 p.m. in Sleepy Eye. With the win Thursday, Hutchinson guaranteed itself a spot in the District 2 playoffs.

“I liked our approach at the plate, we just didn’t get a lot of good, hard contact,” Sleepy Eye head coach Brandon Streich said. “The contact we made was weak and they made the plays. Pitching wise, I thought we could have done a lot better. You look at six of their runs, five of them reached base via walk or an error. You’re not going to win a lot of games when you give a team that many opportunities.”

Post 800 allowed three errors and their three pitchers, Jackson Huiras, Jacob Stevens and AJ Arneson each allowed three walks. Stevens took the loss in an inning of relief for Huiras, giving up five runs on three hits, with four runs being earned.

Huiras went four innings and gave up one earned run on two hits as the starter, while Arneson pitched the final two innings and allowed no hits and no runs with a trio of strikeouts.

Sleepy Eye took the lead right away on Thursday in the bottom of the first after Kadon Strong’s RBI to center field scored Jacob Lux, who reached earlier on an infield single. After that, Sleepy Eye didn’t get another hit until Kegan Heiderscheidt singled in the fifth for Sleepy Eye’s third and final hit of the game.

Hutchinson tied it up in the third after a wild pitch by Huiras with the bases full brought in a run. Hutchinson added three more runs in the fifth inning, led by KK Starrett’s two-run double with two outs.

Starrett also pitched all seven innings for Hutchinson and got the win.

Hutchinson brought its final two runs home in the sixth inning after a bases-loaded two-run double by Brady Knorr.

Despite the loss, Sleepy Eye did have a defensive gem in the fourth inning after Huiras, who switched from pitcher to shortstop, turned a triple play with two on. After Grant Ketcher lined a pitch to Huiras, Huiras stepped on second and fired to first for the final out of the inning.

After missing out on a guaranteed spot in the District 2 playoffs with the loss Thursday, Sleepy Eye has another shot Friday to rebound and move to the next round.

“We’re in the same position yet where we’re still one win away from where we want to be,” Streich said. “So we’ve to kind of rest overnight, do our thing and get ready to play tomorrow [Friday]. That’s all we’ve gotta do.”