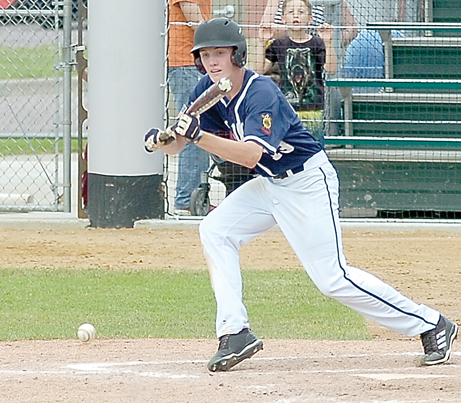 NEW ULM — After cruising through the Alexandria Tournament with four wins, New Ulm Junior Legion Gold ran into some speed bumps Wednesday in their game with the Mankato Royals at Mueller Park.

New Ulm was guilty of three errors — two of which came in a three run sixth inning for the Royals — as Mankato downed New Ulm 5-4.

Ben Snaza got the win for Mankato. He went 5 2/3 innings to secure the win.

Matt Rieger took the loss for Junior Legion (15-7). He was charged with four runs on six hits.

Ethan Fox and Nic Cook had two hits each for the Royals.

“It was a good back and forth game,” Junior Gold head coach Mike Munce said. “We had too many errors on the board (3), but you have to learn from your mistakes. We came off of a big tournament win over the weekend — we came back and were not quite ready to play.”

Mankato took a 1-0 lead in the top of the second when Wyatt Fowles singled and stole second. He went to third on an Ethan Fox groundout before scoring on a Cook single.

The Royals made it 2-0 in the third when Fowles singled and went to second on a Fox sacrifice bunt. He stole third and scampered home on another single by Rogers.

Junior Gold, who hosts Hutchinson at 6 p.m. Thursday at Mueller Park, cut the lead to 2-1 in the fourth. But it could have been a bigger inning.

Nolan Drill led off with a double and Cade Bushard reached on an error. Stade’s bunt single loaded the bases with no outs.

Noah Wilmes was hit by a pitch, forcing in Drill to cut the lead to 2-1. But a 1-2-3 double play, followed by an inning-ending groundout ended the inning. It was the second double play that New Ulm hit into in the game.

“Sometimes that is the way it goes,” Munce said about the double-play balls. “You hit the ball hard in the wrong spot and they end up getting two outs out of it.”

Mankato used one hit and two errors to score three unearned runs in the sixth for a 5-1 lead.

Junior Legion came back in the bottom of the inning, with two runs scoring on a fielder’s choice and an error.

New Ulm then mounted a threat in the bottom of the seventh when it scored a run to cut the lead to 5-4. Junior Gold then had runners on first and second when they hit into a game-ending groundout.

“We had a chance in the seventh with the tying run on second,” Munce said. “We were right there.”