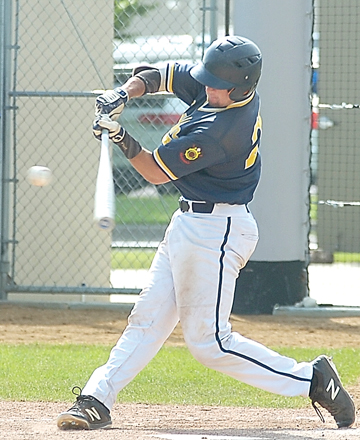 NEW ULM — For the first time since 2015, New Ulm Legion Gold are the champions of the Upper Midwest Classic.

Teddy Giefer scored the winning run in the bottom of the seventh. He doubled with one out and took third on a passed ball. He then scored on an infield throwing error as New Ulm downed Chaska 4-3 Sunday afternoon at Mueller Park.

Mark Schommer was credited for the win in relief of starter Cole Backer.

“We have been clicking all weekend,” Gold coach Chris Peters said. “This was game five of the tournament for us and we came out a little flat but things went our way and we put the ball in play when we needed it in the seventh inning and beat a good Chaska team.”

And while Mark Schommer was credited with the win, the job done by Backer set the stage.

Backer pitched five strong innings despite recently having eight stitches removed from the bottom of his big toe on his right foot after stepping on a ping pong table at home. “I got them out Friday but I had warmed up (Saturday) and it felt good.”

Backer did allow a run in the first to Chaska when Will Magnuson led off the game with a triple and scored on a Born sacrifice fly,.

But other than that, Backer was dialed in as he allowed just one more hit in his five innings.

“My outfielders did a great job,” Backer said. “They tracked down the ball well — Jaden (Domeier, Gold center fielder) had three great catches so it was my defense more than me.”

New Ulm tied the game at 1-1 in the bottom of the inning when Domeier singled, took second on a passed ball, third on a Josh Seidl sacrifice and scored on a Hunter Ranweiler sacrifice fly.

The score remained that way until Gold pushed two runs across in the fifth. Mason Cox and Jace Marotz both singled. A Giefer single plated Cox and a Domeier sacrifice fly brought in Marotz for a 3-1 lead.

Chaska, who had advanced to the title game with a 2-1 win over Brandon Valley earlier, tied the game off of Schommer in the sixth with two unearned runs coming on an infield error and two singles.

But Gold rallied for the win in the seventh.

Peters said that Backer came through when New Ulm needed it and did a great job.

“And Mark (Schommer) arm was feeling well — he only thew 80 pitches the other night,” Peters said.

New Ulm got to the title game ealier in the day with a 12-8 win over Creighton Prep.

New Ulm. now 16-3 on the year, is off until Friday when they begin play in the Gopher Classic against Anoka.