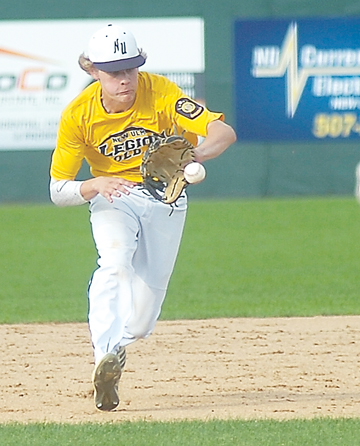 NEW ULM — In the top of the sixth inning, Eastview scored four runs to cut the New Ulm Legion Gold lead to 7-4 and gain some momentum.

But in the bottom of the inning, Gold took advantage of three Eastview errors to score four runs of their own on only one hit and went on to stop Eastview 11-4 Saturday night at Mueller Park.

Jace Marotz got the win for Gold. The right-hander did not allow a run for five innings and held the Eastview bats to just three hits in that span.

Bryan Lugo took the loss for Eastview. He allowed three first-inning runs to New Ulm and recorded only one out.

Jaden Domeier and Chris Knowles each had two hits for New Ulm, with Knowles driving in three runs. He also came up with three defensive gems at shortstop.

Ben Malloy and Parker Hagebock each had two hits for Eastview.

New Ulm now plays this morning at 9:30 p.m. at Mueller Park against Creighton Prep, and at noon, Brandon Valley meets Chaska. Winners meet at approximately 30 minutes after the completion of the second game for the Championship.

“We have been playing well all year and have put balls in play,” Gold coach Chris Peters said. “And we have been able to put pressure on opposing teams. Today we did the same thing and the game went our way.”

New Ulm held a comfortable 7-0 lead after five innings behind Marotz, when he hit Brian Zurich to start the sixth. Owen Dauk followed with a base hit. A good defensive play by Knowles at shortstop recorded the first out. Zurich scored on an infield out and before the inning was over, Marotz had been relieved by Colton Schaeer and Eastview had cut the lead to three runs.

“Jace has not pitched for us in three weeks,” Peters said. “He had his school trip and he missed a few days of baseball. But he attacked the zone the first three innings. Right now his legs are not in shape. We ran him as long as we could and he did a nice job and in the end he did a nice job.”

But any idea that Eastview had of a comeback was doused in the bottom of the inning when Gold used two errors, a single by Knowles, a walk, another error and two more walks for an 11-4 lead.

New Ulm scored three runs in the first and the fifth inning and added a run in the fourth for a 7-0 lead.

“We’ve hit the ball well all year,” Peters said. “Putting the ball in play is our biggest thing — when you put pressure on defenses, good things happen.

“Our defense has been playing real well the last few games and we have had made the plays. Chris (Knowles) has played well and anywhere I put him, I get 100 percent from him.”