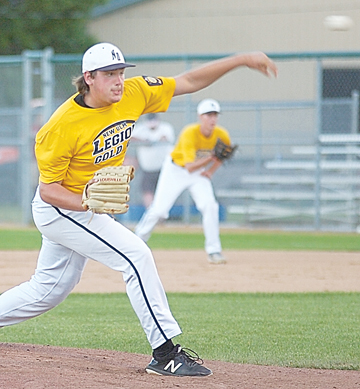 NEW ULM — Aaron Portner scattered three hits through seven innings and New Ulm Legion Gold took advantage of four Luverne errors and a tough dusk sky as they opened their play in the 2019 Upper Midwest Classic with a 5-1 win.

Portner ended with 10 strikeouts and carried a no-hitter into the sixth inning when Luverne’s Gage Nash led off with a base hit.

Jake Haugen took the mound loss for Luverne. He allowed nine hits and struck out one.

“Aaron pitched a nice ballgame for us,” Gold coach Chris Peters said. “It was not his best, but he threw well enough for us to win. Our defense came in and made the plays.”

The same could not be said for the Luverne defense as twice it lost balls in the dusk sky and added in three infield errors.

“It was a tough sky down here at a certain time,” Peters said. “It is tough to see the ball. It just happened to go our way tonight.”

New Ulm scored two runs in the third inning and again in the fourth to stake the left-handed Portner to a 4-0 lead.

In the third, Seidl singled and went to third on Hunter Ranweiler’s base hit.

Braden Zimmerman then skied a fly ball to center field and when the ball was lost in the dusk, both Seidl and Ranweiler raced home and Zimmerman stood on second.

Jace Marotz reached on an infield error that allowed him to reach second. Marotz tagged and went to third on the play. When the throw to third got by the third baseman, Marotz scored.

Jaden Domeier followed with a base hit, swiped second and came home on an outfield error.

New Ulm added a run in the fifth on an error and a passed ball.

Luverne broke the shutout in the seventh on a Derek Lundgren double.