Jr. Legion holds on against Willmar for 10-8 win 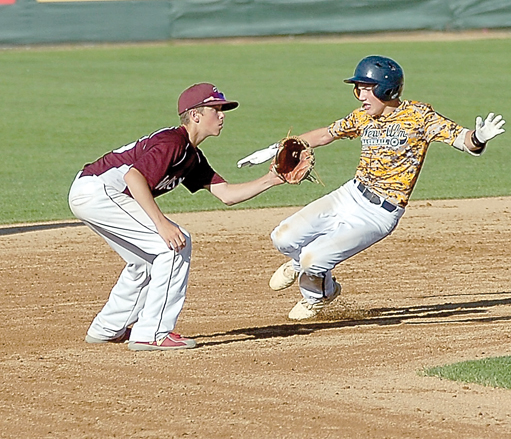 NEW ULM — The New Ulm Junior Legion Gold team scored runs in every inning that they batted and they needed them to get past Willmar 10-8 on Tuesday night at Mueller Park.

Sam Keckeisen got the win for New Ulm. He went five innings and was charged with four runs on seven hits. All four of his runs allowed came in the first two innings. Tony Geiger pitched the final two innings and yielded four runs.

“This was a good game for us.” New Ulm coach Mike Munce said. “We had a letdown this weekend in the (Junior Classic) tournament — Willmar won it — and we knew we should have been there, so we wanted to prove that to ourselves.”

Willmar grabbed a 4-1 lead after 1 1/2 innings off of Keckeisen. But after the second inning, the right-handed Keckeisen worked out of several jams and left the bases loaded in the fifth when Willmar mounted a threat.

That let the Junior Legion team get back into the game.

New Ulm scored four runs in the second inning, using an infield single from Wilmes, a groundout, and singles from Ranweiler and Jackson Bode.

New Ulm scored single runs in the third and fourth innings on an Ethan Sade single and a Drill double.

In the fifth, a Chris Swantz two-run double made it a 9-4 game.

Willmar pushed across four runs in the top of the sixth inning to cut the lead to 9-8 off of Geiger, but New Ulm got an insurance run in the bottom of the sixth on a Wilmes base hit.

“This was an all right game for us,” Munce said. “Willmar has three losses this year and two of them are to us.”