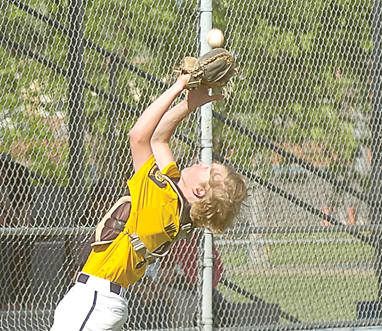 New Ulm jumped out to an early 9-0 lead after the first inning. Gold also scored runs in every inning it batted.

Gold took advantage of six Sleepy Eye walks and one error in the first inning. Jackson Bode drew a leadoff walk and later scored on Evan Wiltscheck’s walk for the first run.

Sleepy Eye then got its first run in the bottom of the first after AJ Areson singled to center field. He scored Sleepy Eye’s first run when Kadon Strong doubled to the left-center field fence.

Wiltscheck reached on a walk in the second inning. Tony Geiger entered as a pinch runner and he scored on Isaiah Miller’s line-drive single to right field, making it 10-1 Gold.

Jack Schroepfer singled in the bottom of the second inning for Sleepy Eye. He scored on a sacrifice groundout by Jack Nelson for Sleepy Eye’s final run of the game.

Drill singled in the third inning and scored later on a sacrifice for another Gold run and an 11-2 advantage.

In the fourth inning, Bode reached on an error and Drill walked. Cole Ranweiler then belted a triple which brought in Bode and Drill for a 13-2 lead.

Hunter Sehr then cracked a double and later scored on a Geiger hit. Arndt scored Gold’s final run on Ethan Stade’s hit for the 16-2 final score.