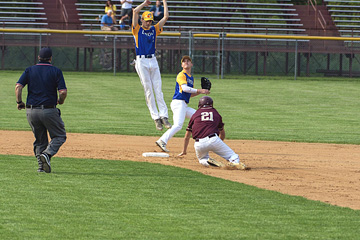 SPRINGFIELD — With Isaac Fink on the mound, the Springfield lineup didn’t need to produce too many runs against Mankato Loyola on Thursday.

But the Tigers gave Fink more than enough run support, scoring eight times in the first inning. Fink meanwhile, rolled along and allowed just one hit as the Tigers advanced to face No. 1 seed BOLD on Saturday with a 10-0 victory over Loyola in five innings. BOLD defeated New Ulm Cathedral 2-1 on Thursday.

Fink was dominant. After throwing a no-hitter in the first playoff game for the Tigers, he was locked in again and allowed just one hit — that coming in the fourth inning. He struck out six.

The big hit in the first inning came off the bat of Mason Rummel, who drove a one-out double to left-center that scored Henry Scheitel and courtesy runner Tori Helget. After that, the runs just kept coming for the Tigers.

“We came into it having fun, that’s what we’ve been taught, always come in loose and ready to play,” Rummel said. “I’ve had a really good year at the plate, I’m just more relaxed and more confident. I started off the year well which helped out.”

After Rummel’s double, Mitchell Leonard laced a line drive down the third base line to make it 3-0. Hunter Mathiowetz, Mitch Buerkle and Decker Scheffler also added an RBI for the big lead.

Fink allowed a leadoff walk in the second and then hit a batter to put runners on first and second with nobody out. But he got Casteel to hit a soft liner back to him. Fink fired to first to get the second out and the runner on second base was also retired for a triple play after there was some confusion by the Crusaders whether or not the ball hit the ground.

The Tigers got two runs in the fourth inning for the 10-0 lead and Fink kept up the quick work on the mound.

“He’s very good, he can locate his pitches and he’s got three good ones and they always seem to be on,” Mathiowetz said. Mathiowetz finished the game 2 for 3 with three RBIs.

Rummel was 1 for 3 with two RBIs and the Tigers finished the game with 10 hits.

A ray of good news sunshine