Greyhounds advance in 2A 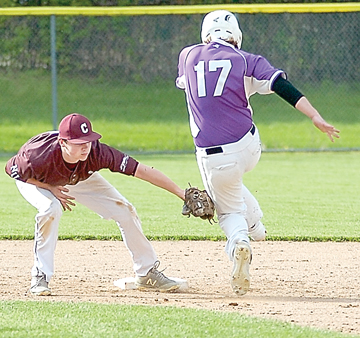 NEW ULM — With the game-tying run on second base with two outs in the top of the seventh inning, New Ulm Cathedral’s Mark Schommer dug deep and recorded his 12th strikeout of the game as the Greyhounds hung on for a 3-2 win over Martin Luther-Granada/Huntley-Truman Tuesday afternoon in a Section 2A winner’s bracket game at Johnson Park.

Left-hander Paxton Gravlin took the loss for the Jaguars. He struck our four and held Cathedral to four hits.

Josh Seidl and Schommer each had a double for Cathedral, now 15-4. The Greyhounds now play at 5 p.m. Thursday at BOLD.

For Cathedral coach Bob Weier, the game came down to his senior right-hander.

“We found out what Mark Schommer is made of in that last inning,” Weier said. “He got into trouble in that [seventh] inning when they had the tying run at second base with no outs and he was a real bulldog. He went to work — he was smart enough to take a little time between pitches.”

Schommer then ended the game by striking out Gravlin for the final out.

“He came through big for us,” Weier said.

Cathedral held a slim 1-0 lead thanks to an RBI bloop single from Tony Geiger in the bottom of the second that scored Noah Wilmes when they used small-ball — and an error — to score twice in the fourth inning.

Wilmes walked to start the inning and raced to third on a Schommer double to right-center field.

Weier then called for the squeeze bunt that was executed perfectly by Will Schabert to score Wilmes. But Jaguars’ second baseman Carson Fischer’s throw to first sailed down the right field line and allowed Schommer to ramble home for a 3-0 lead.

“At this point in the season, you need to execute,” Weier said. “They have to do what they are asked to do and Will laid down the perfect suicide bunt. It got past the pitcher and it made for a tough play for the second baseman and he threw it away.”

That throwing error proved to be the winning run as the Jaguars scored two unearned runs in the top of the sixth inning.

“We are in the playoffs now and the main goal is to win,” Weier said.