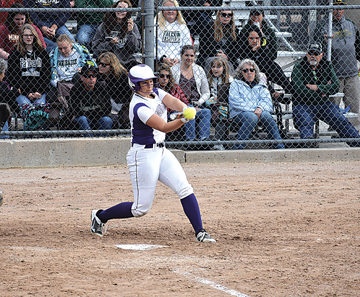 But the Eagles, who lost to Faribault 1-0 last Thursday, didn’t seem to care what others thought. Instead, Madeline Gag drilled a solo home run in the fourth inning to give her team a 1-0 lead, then the Eagles scored three more times in the fifth inning.

At that point, New Ulm ace righthander Ashlyn Donner was on a roll, striking out 12 batters and allowing five hits as the Eagles moved on the Section 2AAA finals with a 7-0 victory over Faribault.

The Eagles now face the top-seed from Mankato West at 5 p.m. on Thursday at Caswell Park. New Ulm needs to win both games in order to qualify for the state tournament.

Gag finished the game 3 for 4 with two doubles, a home run and two runs scored. It was a complete turnaround from the last time the Eagles faced McKayla Armbruster, who struck out 13 last Thursday. This time, the Eagle were patient at the plate and got big hits all game.

“She looked less scary because we definitely prepared for her more and we decided to do things differently,” Gag said.

After Gag delivered a solo home run in the fourth to give her team a 1-0 lead, the Eagles added to the lead in the fifth inning. Nora Windschill led off with a double and Ellie Bute drove her home with an RBI single. Joey Batt later doubled to put runners on second and third and Carli Botten followed with a two-run triple to put New Ulm ahead 4-0.

While Donner was moving through the Faribault lineup with ease, it seemed that Armbruster was struggling as the game went on against the Eagles. New Um added two more runs in the sixth inning, one run coming when Maddi O’Connor slapped a bunt that scored Gag to make it 5-0. O’Connor later scored on an errant throw from third base. The Eagles got one more run in the seventh for the final score of the game. Botten doubled and scored on Abbey Lee’s single.

Botten finished the game 2 for 4 with two RBIs, a run and a triple. Bute was 2 for 4 with an RBI and a run scored.

“We’re beyond excited, our biggest one was going to be Faribault and now we’re excited for West,” Gag said.