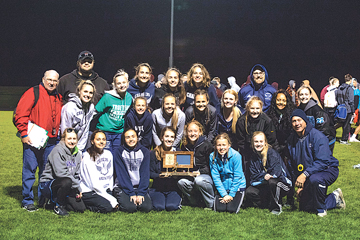 Submitted photo The Minnesota Valley Lutheran girls’ track and field team competed at the Class A State True Team Meet at Stillwater High School on Saturday. The Chargers finished seventh at the event.

STILLWATER — The Minnesota Valley Lutheran girls’ track and field team finished seventh out of 12 teams at the Class A True Team meet on Saturday at Stillwater High School.

The MVL 4×100-meter relay team continued to have a good season and on Saturday the team took first overall in 52.66 seconds. The Chargers also finished fifth in the 4×800-meter relay with a time of 10 minutes, 44.83 seconds.

Abby Nelson took seventh overall in the 800-meter run. She finished the event in 2:33.99

Mara Weisensel took eighth overall in the discus with a throw of 96-feet, 3 inches. She also finished sixth in the high jump with a mark of 4-8 and she was fourth overall in the 100-meter hurdles with a time of 16.64.