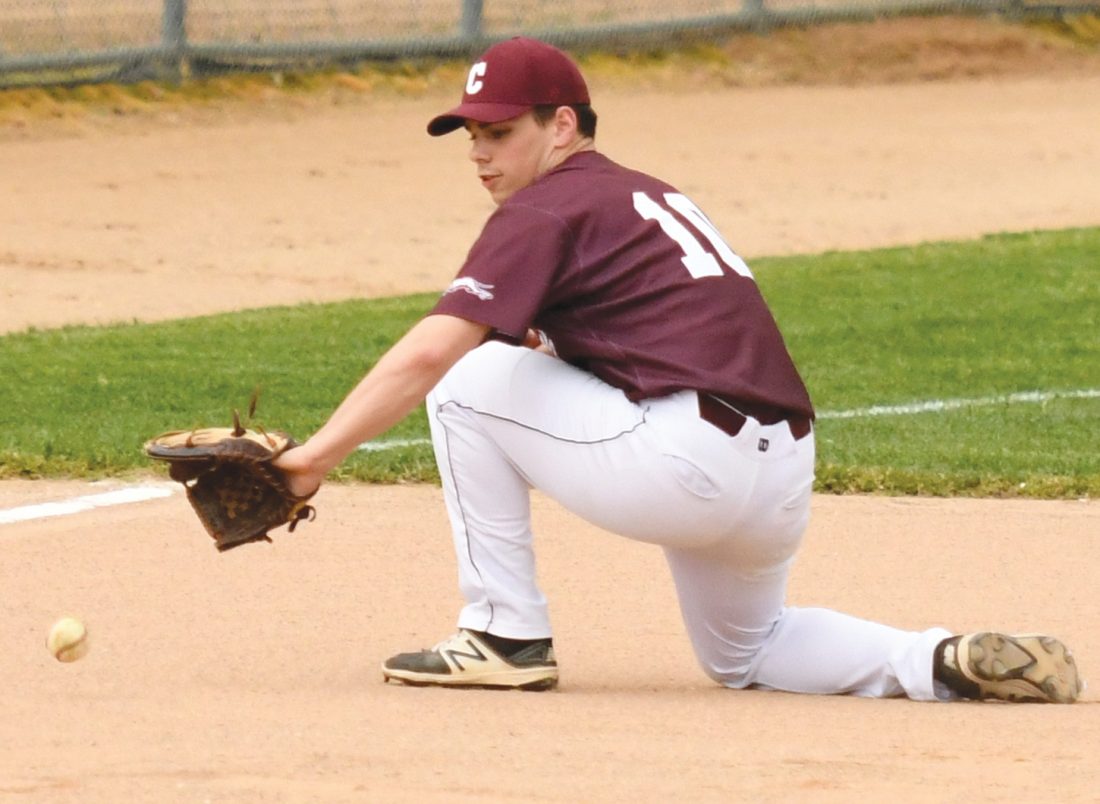 Photo courtesy of Don Borstad New Ulm Cathedral’s Tony Geiger fields the ball at third base during a Tomahawk Conference baseball doubleheader with Buffalo Lake-Hector-Stewart on Friday at Johnson Park.

NEW ULM — With just a few games left on the regular-season schedule, the New Ulm Cathedral baseball team wanted to roll into the playoffs following a big Tomahawk Conference win over Springfield on Tuesday.

But on Friday, the Greyhounds met Buffalo Lake-Hector-Stewart ace Dylan Maiers. Maiers was tough from the beginning, allowing the second-place team in the conference just five hits as the Mustangs won Game 1 of a doubleheader 5-1 at Johnson Park.

The Cathedral bats woke up after seeing Maiers and won the second game 15-0 in five innings.

In the first game, the Mustangs got some early run support for Maiers and he allowed a single run in the first inning. But after that, he allowed three hits the rest of way in the complete-game effort. He finished with 10 strikeouts and he allowed just one walk in the game.

Aaron Portner took the loss for the Greyhounds. He gave up six hits in the game, five runs and he struck out nine batters.

The Mustangs struck first in the top of the first. After Portner struck out the first two hitters, Nathan Schultz greeted Portner with a two-run home run to give his team the early lead.

The Greyhounds responded in the bottom of the first with Portner helping his own cause. After Josh Seidl doubled with two outs, Portner singled to cut the lead to 2-1.

The Mustangs added to their lead in the third inning when Cale Luthens hit a sacrifice fly to center that scored Elijah Stifter from third. However, Maiers tagged up late on the play from second base and was thrown out at third base for the final out of the inning.

Both teams were relatively quiet until the seventh, when the Mustangs scored two more runs to make it 5-1. Stifter drove in Braden McColley and Caden Homan with a two-run double.

In Game 2, Cathedral scored six runs off of BLHS starter Ben Dornseif and ran away with the win. Dornseif lasted just 1 1/3 innings.

Sam Knowles earned the win in the second game. He allowed just one hit in five innings, that coming in the first inning to the leadoff batter. He struck out two.

Portner led the way offensively with a triple, two doubles and six RBIs

Cathedral scored a run in the top of the first after Chris Knowles singled to score Alex Hillesheim. Chris Knowles drove in two more runs in the second inning with a double and Seidl and Portner followed with an RBI double and triple, respectively, to put the Greyhounds up 6-0 early.

The Greyhounds continued to pile on the runs, scoring four runs in the fourth inning and five more in the fifth inning.

Cathedral (12-4) is at Cleveland on Monday for the final regular-season game.