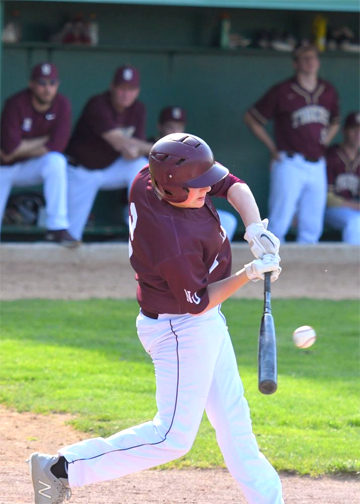 Photo courtesy of Don Borstad Cathedral’s Will Schabert delivers a single in the second inning in Cathedral’s 3-2 win over Springfield on Tuesday at Johnson Park.

NEW ULM — All season long, the New Ulm Cathedral offense has had big contributions from everyone up and down the order.

On Tuesday, it was Tony Geiger’s turn to deliver. Geiger drove a Henry Scheitel offering to the fence in the botton of the fourth, driving in Aaron Portner and Mark Schommer to tie the game at 2-2.

With two runners on base and one out, Geiger had his chance to shine and he came through.

“It felt great, our first time through the lineup, he was throwing a lot of curveballs,” Geiger said. “I was going up there thinking he was going to throw a curveball right away, but a couple batters prior he was struggling to find the zone. I figured I’d step up in the box a little looking to find a fastball. His first one he missed outside with a fastball so I was thinking fastball again right away and he put it in my wheelhouse and I just unloaded on it.”

Schommer earned the win for the Greyhounds. He went six innings, allowed nine hits and two runs, both of those in the second inning. He struck out two and gave up six hits.

Sam Knowles allowed two hits in the seventh inning but he got the save. The Tigers had a chance to tie the game with one out in the top of the seventh, but Isaac Fink was thrown out at the plate for the second out after he tried to score from second on a single by Mitchell Leonard.

Henry Scheitel pitched six innings and took the loss. He gave up six hits and three runs while striking out two.

The Tigers scored two runs in the top of the second inning. Hunter Mathiowetz walked and with two outs, Mitchell Buerkle doubled to put the Tigers ahead 1-0. Decker Scheffler then singled to score Buerkle to put Springfield ahead 2-0.

After that, the Cathedral defense made some big plays and Schommer made some big pitches to get out of some jams. In the bottom of the fourth, he got some run support.

There, Aaron Portner doubled with one out and Schommer reached on an error. Geiger’s triple tied the game and Knowles drove in the eventual game-winning run with a single.

The win was a big one for the Greyhounds (11-3, 10-2), who host Buffalo Lake-Hector-Stewart on Friday in a doubleheader.

“It’s getting real close and it’s kind of confirming that we can compete with some of these better teams,” Geiger said. “We had a tough loss to them the first time around and a loss to BOLD, so it just shows that we’ve gotten better and we’re still competing.”

Scheffler was 3 for 4 for the Tigers and Henry Scheitel was 2 for 4. Fink, Scheitel and Leonard were each 2 for 4.

Geiger was 1 for 3 with two RBIs, a triple and a run scored and Knowles was 1 for 2 with an RBI.

Coach Bob Weier was happy to see the team keep swinging away despite the early deficit.

“We didn’t give up today, we were down 2-0 for quite a while and I think our kids don’t give up up and we weren’t pressing,” Cathedral coach Bob Weier. “They had an at-bat or two against their pitcher [Scheitel] and they figured him out for an inning.”