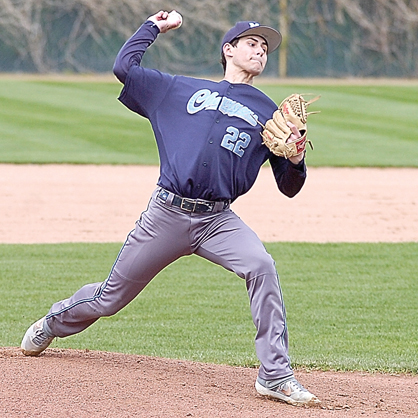 It also gave the Chargers a sweep in the doubleheader as MVL defeated the Knights 6-1 in the opener.

“Defensively we were very solid [two errors in two games] and our pitchers were hitting their spots,” he said.

Dallas Bauer took the loss for the Knights.He was charged with six runs in five innings of work.

MVL jumped to a 3-0 lead in the bottom of the first on an RBI single from Leyton Brau before adding two more runs on walks.

The Chargers added two more runs in the fourth on singles from Willie Sanders, Owen Rich and Cox.

St. Mary’s scored its lone run in the fifth on a Carter Currans’ groundout.

MVL matched that with a run in the bottom of the inning when Franklin Selvey walked and came around to score on a Weisensel base hit.

In Game 2, the Chargers scored two runs in the fourth and again in the fifth for the win.

Matt Rieger got the win. He allowed four hits and struck out three.

Cox, Rieger and Josh Giefer each had two hits with Teddy Giefer driving in four runs.

An error and a Teddy Giefer groundout scored two runs in the fourth inning.

In the fifth, a Josh Giefer RBI single and an error brought in two more runs.

A Chargers’ error scored the only run for the Knights in the sixth.

MVL sent 10 men to the plate in the seventh to score six runs with three of them coming on Teddy Giefer’s three-run double.

Gunderson said that the doubleheader sweep was the best two games that his team has played.

“Our guys came together, picked each other up and played well defensively,” Gunderson said.

St. Mary’s coach Bruce Woitas said that the Chargers took advantage off all of their opportunities in the game.

“We bunched a couple of walks together in the first game and game two blew up in the seventh and then they got the big hit.”