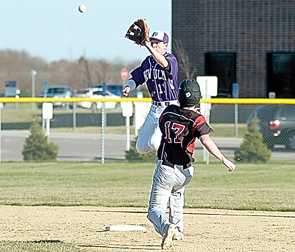 Staff photo by Steve Muscatello New Ulm second baseman Noah Hauge jumps to catch the ball as Daniel Pavelko of Worthington gets to the base during the Eagles’ win Tuesday at NUHS.

Braden Zimmerman allowed three runs in 5 1/3 innings of work — just one of those runs were earned — and the Eagles’ offense collected 13 hits as New Ulm rolled the Trojans 7-3.

New Ulm coach Kevin Briggs was happy with the performance of Zimmerman in the game.

“He threw well and got ahead of the hitters,” he said. “We ran his pitch count up (85) and we were able to get Colton (Schaefer) some mound work. He needed to get some work as we have played only four games so far.”

Briggs was also pleased with his team’s hitting in the game.

“We were very patient at the plate,” he said. “We worked some counts early in the game and we had good at-bats. But we left a lot of runners on base (10) and this game should not have been this close.”

New Ulm took a 2-0 lead after three innings on single runs in the second and third innings. A Jackson Bode groundout in the second scored the first run and a Cole Ranweiler base hit added the other run.

Worthington cut the lead to 2-1 in the top of the fourth before the Eagles pushed three runs across in the bottom of the inning.

“We put pressure on them and their pitchers were struggling to throw strikes because of that pressure,” Briggs said. “I was proud of the way we executed that. But we need to get better as the year goes on.”

New Ulm (2-2) has home games Thursday and Friday when they host Fairmont Thursday and Blue Earth Friday. Both games have 5:30 starts.