Hogue breaks records on her way to state 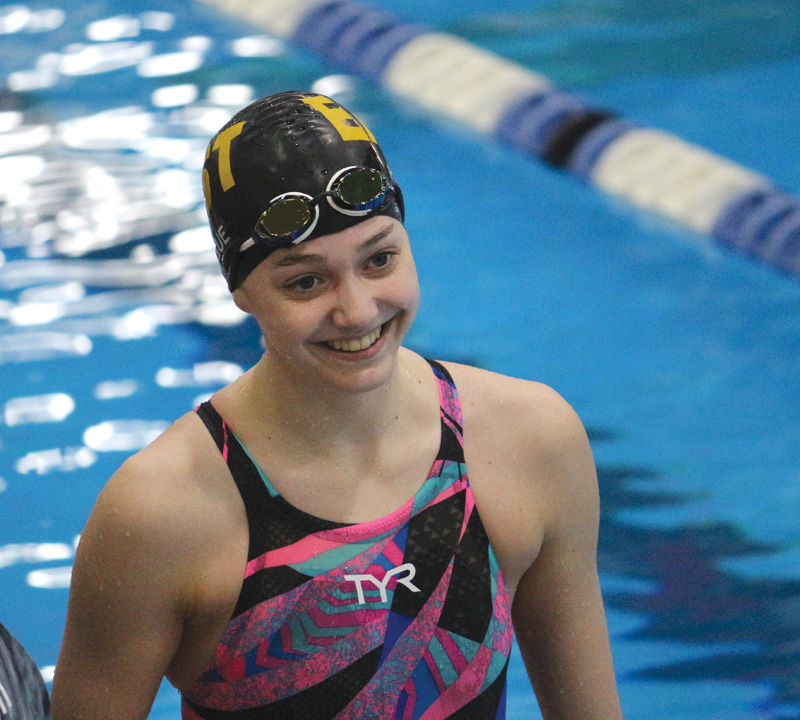 Submitted photo Maddie Hogue smiles during her record-breaking day at the Section 1A Championship in Rochester.

NEW ULM — Maddie Hogue may be from New Ulm, but she’s been swimming for the Mankato East High School swim team, breaking records this year and making a name for herself in the process.

As a result of her record-setting night, the sophomore qualified for state in both events.

As if that wasn’t impressive enough, Hogue also anchored both the 200 and 400 free relay teams, helping both teams qualify for state. The teams, made up of Hogue, Megan Burrows, Kaylee Sivertsen and Grace Busch, finished as the section champions in the 200 relay with a time of 1:39.76, also a school record.

“As a swimmer, she has fantastic athletic ability,” Summers said. “She can really swim any of the strokes and she can do them all really well, which can be kind of a challenge in a sport where, a lot of times, we end up specializing in just one event. She’s definitely on the sprinter side of swimming — like the 50 free, 100 free, 100 fly, those kind of events. She’s got quick speed in and out of the walls and her stroke is just so fluid. When you’re watching it, you’re like, ‘She can’t even be trying that hard.’ Then you see the time on the clock and you’re like, ‘Oh my gosh, how did that just happen?’

“As a teammate, she’s just a really kind-hearted person, always looking to see where she can contribute in some way, shape, or form. She’s willing to swim any of the events at a meet. You’ll always see her cheering on her teammates, she’ll be standing at the end of the lanes or greeting them behind the blocks when she’s getting ready for her race. Definitely a team player.”

Mankato East hasn’t been to state for girls’ swimming since 2003, so this will for sure be a big moment for Hogue and the team.