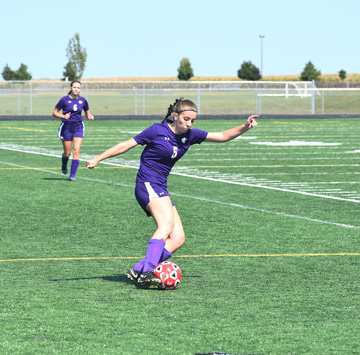 NEW ULM — The New Ulm girls’ soccer team has plenty of speed. On Saturday, the Eagles got to show that skill off against Faribault.

New Ulm raced to a 4-0 halftime lead and ran away with a 6-1 victory over Faribault in a nonconference girls’ soccer game. The Eagles’ speed was evident and they fired 20 shots on goal in the first half alone.

“Our speed paid dividends because we ran by them quite a bit, a lot of through balls that worked for us,” coach Jonathan Johnson said. “Just different people scoring, everything was working and clicking well.”

While the Eagles were dominating the ball early, they were taking long-range shots against the wind and that didn’t help.

“We needed to get closer, we were taking them from too far out and that’s easy for the goalie to catch,” Harmening said.