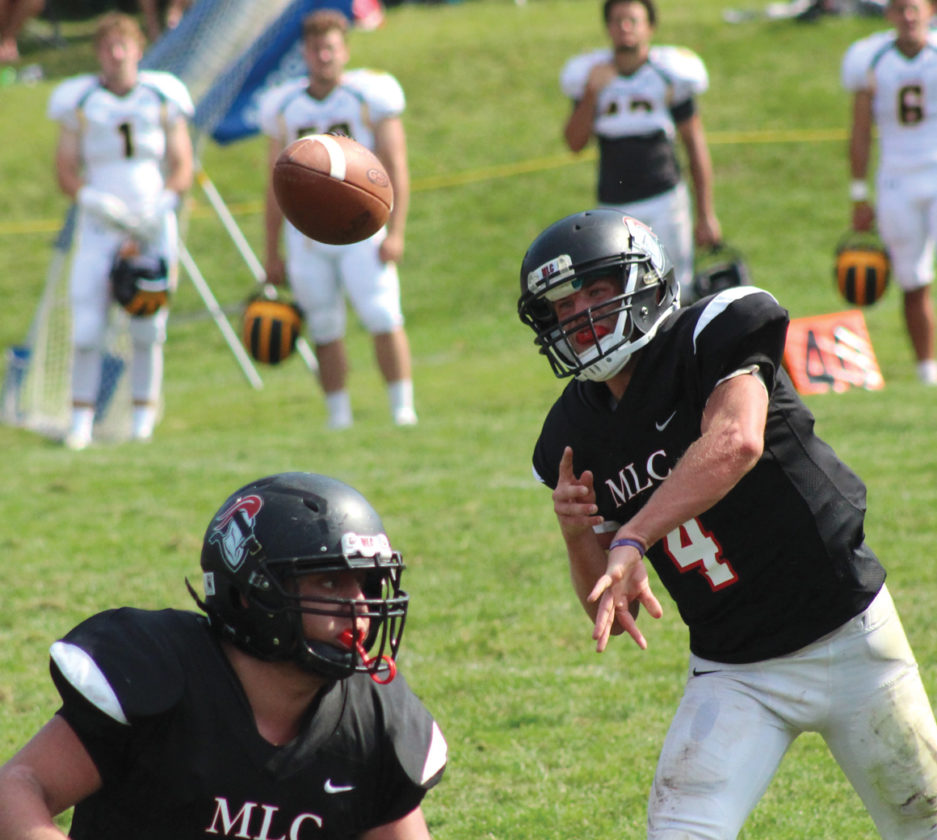 Staff photo by Travis Rosenau MLC quarterback Zach Bloomquist makes a throw during a fourth-quarter drive against Gustavus on Saturday afternoon at MLC.

NEW ULM — The Martin Luther College football team had a 20-18 lead at halftime against Gustavus Adolphus College on Saturday at MLC. The Knights were unable to reach the end zone in the second half, however, falling 32-20 to Gustavus in the nonconference season opener.

The point after touchdown became crucial for the Knights’ defense, with the Gusties failing to capitalize on three different point after attempts in the first half. The missed attempts helped the Knights retain their lead going into the locker room for the second half.

On the first play of the game, Knights quarterback Zach Bloomquist fumbled the football, with the Gusties recovering on the Martin Luther 29-yard line.

Gustavus took just four plays to run into the end zone before a bad snap went out of reach of the holder and no kick was attempted with the Gusties now leading 6-0.

MLC was able to answer back with a completed drive for 70 yards and a 23-yard touchdown run by Austin DeNoyer.

DeNoyer’s run came after Elliot Butler put the Knights inside the 25-yard line with a 23-yard carry up the middle.

MLC’s offense began to show field presence, with the offense moving the ball in six plays on the scoring drive. Bloomquist was 2 for 2 in passing during the drive, finishing 12 for 26 in completions for 84 yards in the air.

Later in the first quarter, the Knights were stuck on the Gusties’ 20-yard line when a reverse play by the Knights’ Mike Radue got 6 yards and a fresh set of downs.

Bloomquist came just inside the right pylon on the next play to give the Knights a 13-6 lead and the momentum on their sideline.

Gustavus then went 67 yards in seven plays to complete a drive with a 2-yard pass into the end zone on a third-and-goal. The Gusties chose to go for 2 and take the lead, but the pass was thrown out of reach and the Knights still held on to a 13-12 lead.

Martin Luther’s Jacob Schmidt recovered a fumble on a punt return with the Knights’ defense holding at midfield. Schmidt’s recovery put the Knights in good field position starting on the Gusties’ 23-yard line with just 4:48 left on the clock.

Bloomquist held onto the football and ran the ball 15 yards to get inside the Gustavus 5-yard line on a third-and-long situation.

DeNoyer ran the ball 2 yards for the touchdown and after the extra point, put the Knights up 20-12 with 2:20 left in the half.

Gustavus was able to reach the end zone with just seconds left in the first half after a pass interference call on the Knights put the Gusties inside the red zone with plenty of time and a chance to tie the game with a 2-point conversion.

After a Gustavus 4-yard touchdown pass play, the 2-point conversion was intercepted by Ian Paulsen as Martin Luther kept its lead at halftime.

The Knights failed to generate any offense out of the break, only making it inside the Gusties 20-yard line once the entire second half.

Gustavus wasted no time in the second half, taking advantage of a bad snap to Knights punter Paulsen with the kick going out of bounds to keep the Gusties on the Martin Luther 20-yard line.

Gustavus needed just one play to reach the end zone and take its first lead of the game, dominating the second half on offense.

DeNoyer led the Knights’ offense with 94 yards from 26 carries and Butler ran for 67 yards on 12 carries. Josh Arndt had 51 yards receiving and DeNoyer grabbed 14 yards.

The Gusties’ Matt Berkner led his team with 11 tackles.

MLC plays again at 1 p.m. on Saturday against Rockford in Rockford, Illinois.