Madelia opens the season with a win 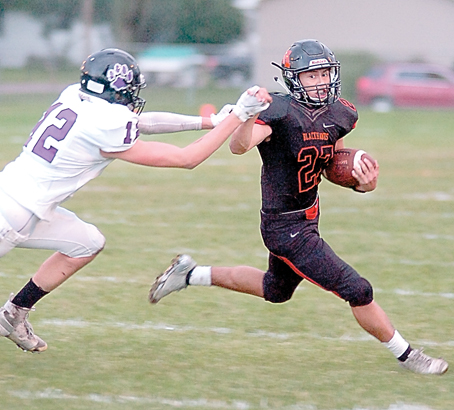 Staff photo by Steve Muscatello Madelia’s Angel Zamora tries to get past Cael Jaskulke of Granada-Huntley-East Chain/Truman during the first half Friday in Madelia.

Owen Wolter hit Clay Gieseke with a 10-yard touchdown pass to give GHEC/T an early advantage of 6-0.

The Blackhawk defense forced the Jaguars to punt. Sletta ran 30 yards with 2:51 left in the first quarter for a 13-6 Madelia lead.

Wolter found Carter Spear for a 38-yard touchdown pass to cut the lead to 13-12 before halftime.

Madelia took the second half opening kickoff and capped it off when Anderson went 18 yards in the third quarter to give the Blackhawks the lead for good at 19-12.

In the fourth quarter, Madelia took advantage of two penalties and it stopped GHEC/T on a fourth down attempt. The Blackhawks engineered a drive which resulted in Anderson’s one-yard plunge to boost their lead to 25-12 with 9:41 left in the contest.

Zamora picked off an errant Jaguar pass. Madelia kept the ball on the ground to protect the lead..

Jon McLaughlin went up the middle for a 35-yard touchdown run. Zamora’s kick was good and the Blackhawks were ahead 32-12.

GHEC/Truman tried to score again but it failed when Kadin Benzel intercepted a Jaguar pass with 21.2 seconds left in the ball game.

“We can’t be in a funk and allow that to control us,” Madelia head coach Nic Willaert said. “We can go 100 percent, things go well, then something happens and we let ourselves get in the way. We have a lot of talent, and this team can be special.”

He was pleased that the Blackhawks had a much better focus in the second half. He said they simplified some things at halftime, and that seems to have worked well for the outcome of the game.

Madelia (1-0) will host Lanesboro on Friday.