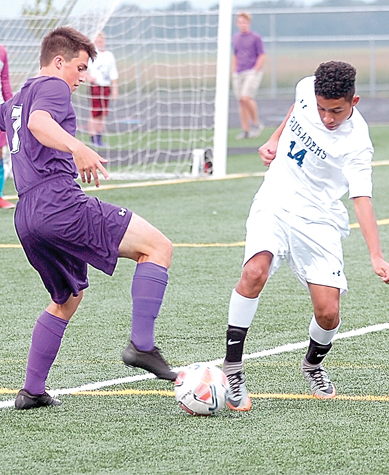 Staff photo by Steve Muscatello New Ulm’s Jack Howard (7) tries to get the ball by Mankato Loyola defender Orlin Sanchez during the first half Thursday at New Ulm High School.

NEW ULM — The New Ulm boys’ soccer team dominated the ball all game against Mankato Loyola. The end result was a dominant 7-0 Big South Conference victory for the Eagles to open the season.

Robert Rauh also scored a goal for the Eagles.

Howard scored what would’ve been the game’s first goal on a header after he got his own rebound, but the goal was waived off at the 32-minute mark. Three minutes later, he misfired on a close shot that kept it scoreless, but he eventually got the Eagles on the board with 11:03 left in the first half after he fired a shot in from close range.

Edwards scored New Ulm’s second goal about four minutes later on an assist from Howard and Rauh put the Eagles up 3-0 with about five minutes left in the first half, with Howard getting his second assist of the game.

Howard started the scoring in the second half on an assist from Rauh and Edwards scored back-to-back goals, with Brandon Ocampo and Josiah Plocher assisted on the goals. Howard scored the final goal with 11 minutes left, and Plocher got the assist.

Plocher and Ocampo each finished with two assists for New Ulm.

New Ulm has another home game on Monday when it hosts Fairmont.