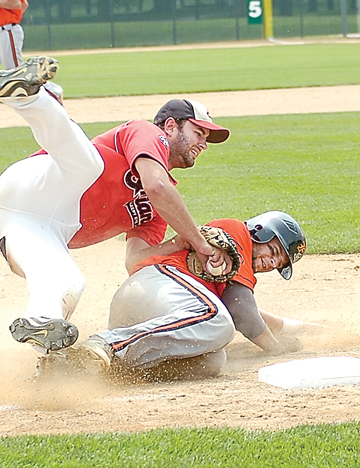 NEW PRAGUE — Scoring eight runs in a game can give a team a pretty big chance of winning.

The Sleepy Eye Indians, though, collected eight runs in just one inning alone. After an eight-run fifth inning on Sunday at Memorial Park, the Indians ran past Elrosa with a 9-4 win in Class C Minnesota State Amateur Baseball Tournament action.

The win advances the Indians to a meeting with the Fergus Falls Hurricanes at 1:30 p.m. on Saturday in New Prague.

The big fifth inning that saw Sleepy Eye bat around started with a leadoff single by Matt Mielke. With one out in the inning, Carter Brinkman made it to first on an error before Sam Tessmer walked to fill the bases. Andrew Woitas then brought in Mielke and Brinkman on a two-run single to bring the Indians within one, 4-3.

Tessmer scored on a fielder’s-choice RBI by Matt Berkner to tie the game at 4-4. A wild pitch allowed Andrew Woitas to score from third before a second wild pitch scored Berkner and gave Sleepy Eye a 6-4 advantage. Alan Woitas then reached with a walk before Alex Sellner was hit by a pitch.

Alan Woitas reached home on a double steal to give Sleepy Eye a 7-4 lead before a ground-rule double into right off the bat of Mielke scored Sellner for an 8-4 lead. Mielke scored the ninth run for Sleepy Eye after an error by the Elrosa shortstop.

Sean Mathiowetz, a draftee for Sleepy Eye from Stark, pitched 6 1/3 innings of relief for Jevan Richert, Leavenworth draftee. Mathiowetz picked up the win, allowing no runs, five hits and a walk.

Ethan Vogt took the loss, allowing eight runs, two of them earned, on five hits and a walk in 4 2/3 innings.

Sleepy Eye manager Bruce Woitas couldn’t ask for a better fifth inning or a better performance from his reliever.

“Obviously when they got the three in the third, they got some key two-out hits,” Bruce Woitas said. “Then we were able to get something going in the fifth, had a lot of first and third — some double-steal situations. We got some key hits from the inning as well and put up eight runs. That took the wind out them a little bit, and we played good defense. Sean pitched well for us when he came in for Jevan… Pitchers did well, defense played well.”

Sleepy Eye scored its first run in the third inning after a groundout by Andrew Woitas scored Brinkman, who reached second base earlier in the inning on an error in center field.

Sleepy Eye will have its hands full when it takes on Fergus Falls on Saturday. The Hurricanes will be making their 20th state appearance in their 30-year history.

Bruce Woitas said that he simply wants his team to play the same way against Fergus Falls that they did against Elrosa, playing good defense with timely hitting and quality pitching.

“[We want to see] the same thing,” Bruce Woitas said. “Good defense — we’ll be without Berkner next week because he’s got Gustavus football, but we’ll just show up and hope for the same thing — clutch hits, pitch well, play good defense and see what happens.”