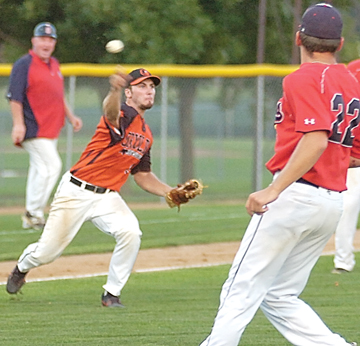 The Indians moved to 3-1 in the round robin playoff series, while Springfield fell to 1-3 in a crucial game for both teams.

Springfield called Andy Cook to the mound as the starting pitcher with Cook being drafted from Leavenworth also. Cook took the loss with 5 2/3 innings pitched, giving up three hits and three runs.

Sleepy Eye led after the first inning when Matt Berkner connected on a full count to drive the ball into the right-field gap to score Andrew Woitas from second. Woitas reached on a walk and took second on a pickoff attempt when the ball reached the fence.

Springfield threatened in the top half of the fifth inning, still trailing 1-0, when Decker Scheffler doubled to lead off the inning. Scheffler was moved to third on a sac bunt from Branden Wilhelmi.

The drive from the bat of Springfield’s Isaac Fink was hit into the gap but was tracked down by Sleepy Eye center fielder Joey Walter. Walter’s relay to the shortstop with a smooth transition play for the second out kept the runner at third.

Richert then got his first strikeout to end the Springfield threat.

Sleepy Eye added insurance runs in the sixth and seventh innings, both times scoring two runs from just one hit and an error in the later inning.

Scheffler led the Tigers, going 1 for 3 with a double and once reaching on a fielder’s choice, and Pat Moriarty went 1 for 3 with a single and reached on an error.

Sleepy Eye’s Berkner was 1 for 2 with an RBI and two walks and two runs scored, and Matt Mielke went 1 for 3 with a double and two RBIs.

Springfield will host New Ulm at 8 p.m. on Friday in Leavenworth.

Sleepy Eye will be on the road in New Ulm at 2 p.m. on Saturday.