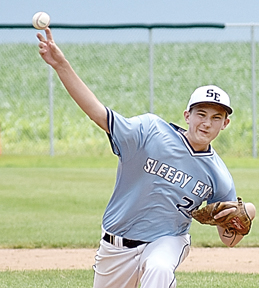 Earlier in the day, Post 800 lost to Wayzata 4-0, each team playing from Pool D, also at Searles field.

A nine-run top of the seventh inning broke a 3-3 tie to lift Harrisburg past Sleepy Eye after Post 800 led 3-0 earlier in the ballgame. Harrisburg’s nine runs came from six hits with only one error.

Sleepy Eye allowed the bases full by giving up a leadoff hit, followed by a hit-by-pitch and a walk with the first three batters reaching. Post 800 looked to get out of the inning when a 5-2 fielder’s choice did not allow a runner to score before Harrisburg brought in runners with an extra-base hit followed by singles to keep the runners moving.

Sleepy Eye’s Carson Domeier pitched six innings with three runs charged and two strikeouts before being relived with the game tied at 3. Jackson Huiras and Jack Nelson threw in relief, with Nelson getting the final two consecutively with the bases loaded once again.

Sleepy Eye put two runners across in their home half of the first inning by taking advantage of an error and reaching on an infield hit.

Nick Labat led of the inning with a walk and Spencer Hoffmann reached on a throwing error to put runners aboard for Sleepy Eye. Domeier laid a perfect bunt down in the sacrifice situation but reached on a defensive miscue to fill the bases.

Kadon Strong walked in a run and was called out at second when Kyle Goblirsch hit into a fielder’s choice with the RBI and Domeier reaching third. Ethan Fischer filled the bases up again for Sleepy Eye with a one-out walk as the team stranded three runners to end the inning.

Sleepy Eye added a run in the fourth inning when Labat singled and advanced to second on a wild pitch to be in scoring position. Hoffmann reached on an error, scoring Labat as Post 800 opened up the 3-0 lead.

Harrisburg scored three runs in the top half of the fifth inning with a two-RBI single and a deep fly ball to sacrifice a runner home as the game was now tied up going into the late innings of the ballgame.

Sleepy Eye’s final game of the pool play, before competing in the runner-up game, was a 4-0 loss to Wayzata in a five-hit game for Sleepy Eye.

Sleepy Eye was able to threaten in both the fourth and fifth innings with runners on third but was unable to bring a runner in and break the shutout.

Sleepy Eye’s Goblirsch pitched 5 1/3 innings, giving up the four runs with one earned. Domeier came in on a relief stint to get the final Wayzata out.