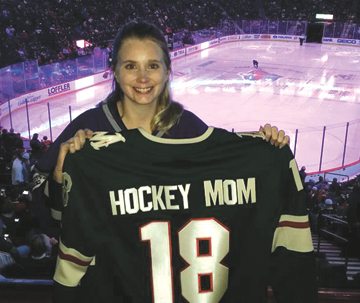 Submitted photo New Ulm’s Patti Gramentz was the winner of the Schwan’s Hockey Mom of the Year after winning an on-ice contest during Monday night’s game at Xcel Energy Center.

NEW ULM — It took a little bit of puck luck, but Patti Gramentz of New Ulm delivered in the end and became the 2018 Schwan’s Hockey Mom Hall of Fame winner on Monday night.

Schwan’s and the Minnesota Wild team up to honor one deserving hockey mom each home game during the season and one person is selected per month. Gramentz was nominated by her husband Eric this past summer and was first named the October Schwan’s Hockey Mom of the Month.

That not only got her and her husband the opportunity to watch Monday night’s game between the Minnesota Wild and the Edmonton Oilers in the Schwan’s Food suite at Xcel Energy Center, but it also entered her in a contest for the chance to be declared the hockey mom of the year.

Gramentz participated in the contest during the second intermission of Monday night’s game. The Wild left the ice after their final regular season home game with a 3-0 victory and Gramentz left a winner as well.

The contest saw all of the previous month’s hockey mom winners take the ice and shoot a puck from the goal line to see who could get the closest to the center ice faceoff dot.

Gramentz took the ice first with five other hockey moms and got her shot to settle just inside the center circle. But another mom’s puck later hit Gramentz’s puck and moved it within a foot of the faceoff dot, giving Gramentz the win.

Gramentz said that she didn’t have a strategy for the contest and that her biggest concern had nothing to do with actually shooting the puck.

“No strategy at all, I was just hoping that I wasn’t going to fall on the ice,” Gramentz joked.

Gramentz got her own jersey as a result and a gift certificate from Schwan’s.

“It was super exciting,” Gramentz said. “I think it was a once-in-a-lifetime thing. How many people can say they’ve been on the ice at the Xcel [Energy] Center during a Wild game?”

Gramentz is more than just a big Minnesota Wild fan, though, as her and her husband are also the host family of New Ulm Steel forward Jimmy Miller.

Although the season didn’t end the way the Steel would have liked in the playoffs, Gramentz said that the team has been improving every year and that she was excited for next season.

“So ready for next year,” Gramentz said. “There’s always the opportunity that next year we’re going to get it.”