Northwestern defense too much for MLC to handle 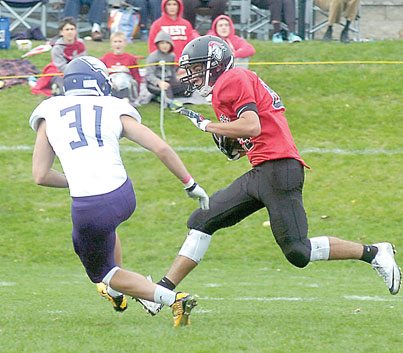 Staff photo by Steve Muscatello Martin Luther College’s Michael Radue tries to get past Carter Michaelson of Northwester after making a catch in the fourth quarter of the Knights’ loss Saturday at MLC in New Ulm. For more photos of this event go to cu.nujournal.com

NEW ULM — The Northwestern defense showed the Martin Luther College football team just why it’s one of the better defenses in the Upper Midwest Athletic Conference.

The Eagles stopped MLC’s running game, which was third in the conference heading into Saturday’s play. Northwestern dominated on the ground and defeated MLC 30-14.

While the offense stalled most of the game, the Knights did start the game off with a bang. Trailing 7-0 in the first quarter after an early touchdown by Northwestern’s Nate VanBeusekom, MLC’s Joseph Herrewig returned the ensuing kickoff 91 yards to tie the game at 7-7.

It was all Northwestern after that.

The Eagles scored 20 unanswered points in the half and raced to a 27-7 halftime lead.

Payton Bowdry scored late in the first quarter on a 5-yard run for the Eagles and his touchdown was followed by Dom McDew’s 8-yard run in the second quarter. Spencer Steel hauled in a 23-yard pass from Taylor Lindahl with 2:07 left in the first half to put the Eagles up 27-7.

Northwestern added a 48-yard field goal in the third quarter and the Knights got a late touchdown on their last possession. Nate Stein scored on a 2-yard run with 4:02 left, capping a 12-play, 75-yard drive.

Bowdry led Northwestern’s rushing attack with 92 yards on 16 carries. McDew rushed for 68 yards. Lindahl threw for 93 yards, an interception and a touchdown for the Eagles.

Offensively for MLC, Ian Paulsen threw for 82 yards and an interception. He had 17 carries for 59 yards. He was also sacked twice.

Tristan Pankow finished the game with 12 tackles for MLC. Keith Brassow had a sack and Herrewig had an interception.