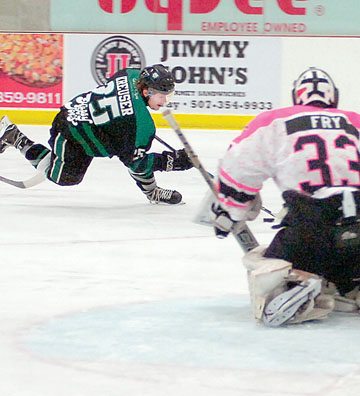 Staff photo by Steve Muscatello New Ulm Steel forward Luc Kreuser (25) tries to shoot the puck as he balances on one skate and Willmar goalie Luke Fry looks on during the first period Friday at the New Ulm Civic Center. For more photos of this event go to cu.nujournal.com

NEW ULM — Ryan Kenny made his first ever start in Junior Hockey one to remember for the New Ulm Steel.

Kenny stopped all 20 Willmar shots he faced and the Steel’s Tom Reilly scored the lone goal of the game in the second period as the Steel downed the Warhawks 1-0 in a NA3HL game at the New Ulm Civic Center Friday night.

These same two teams will meet again tonight at 7:10 p.m. in Willmar.

“We talk all year about playing consistent and playing a full 60-minute game,” Steel coach Andrew Kolb said. “After each period tonight, myself and assistant coaches Bryant Black and Nick Campbell came into our locker room and felt that we were on our way to play that full game. And we got a good first (period) and second and finished it off with a good third. Overall this was the first time we played that full 60-minute game.”

And Kenny was a big reason for the win as he stopped all of the Warhawk shots in the game including spoiling a breakaway from Willmar’s Keegan Bauman late in the second period.

For Kenny, who had been sidelined with a foot injury, his initial baptism of fire in Junior Hockey was “a special moment.”

“It was a really long month for me because of the injury,” Kenny said. “I was trying to get back out there. It was hard to watch my team play without me.”

“Ryan played great for his first game in Junior Hockey,” Kolb said. “He was able to see pucks ­– in the first period he made a couple of Grade A saves which were crucial. That is the kind of game you are going to get out of him.”

The lone goal for the game came off of the stick of Reilly off an assist from Alec Moser when he blasted a shot from just inside the blue line that handcuffed Willmar goalie Luke Fry at the 16:20 mark of the period.

“There were not a lot of shots,” Kolb said. “Our division is tough.”

“We were really strong defensively tonight,” Kenny said. “We had a team-before-me mentality. We just went out and worked.”

Kolb now hopes that his team can keep that consistency going tonight in Willmar.

“Ryan Kenny and Ryan Beilenberg are two top goalies for us and can carry the workload for us,” he said. “It is good to have two healthy goalies.”