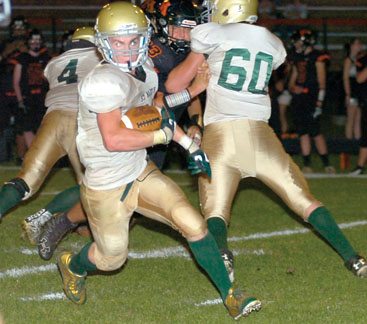 St. Mary’s was without starting quarterback Nick Labat for the second straight game and Andrick Sanchez got the start at quarterback. Labat suffered an injury against Buffalo Lake-Hector-Stewart on Oct. 6.

The only score in the first half came on a 21-yard touchdown run by AC/GE’s Dawson Dahlum with 1:22 left before the half. St. Mary’s did manage to block a 31-yard AC/GE field goal attempt before the touchdown occured, however, but AC/GE led 7-0 at halftime.

St. Mary’s then took a 14-13 lead after Luke Miller recovered an AC/GE fumble for an 18-yard touchdown with 7:02 left in the third.

AC/GE went up 19-14 with 36.8 seconds left in the third on a 19-yard touchdown run by Kaleb Bendickson. AC/GE then had a fumble recovery of its own in the fourth quarter that went 25 yards for a touchdown. AC/GE took a 27-14 lead after a 2-point conversion with 11:47 left in the game.

Sanchez was picked off with 11:33 left in the game by AC/GE’s Ryan Hansen, but Miller had another big defensive play for St. Mary’s right after with an interception of his own. After several St. Mary’s penalties, Sanchez completed a deep pass for 38 yards to Carter Currans on 4th-and-20 to set St. Mary’s up with a 1st-and-goal.

Sanchez punched in a touchdown run shortly after to cut the St. Mary’s deficit to 27-22 with 7:08 left to play. AC/GE continued its offensive surge in the second half, though, and scored two Luke Morrison rushing touchdowns to help put things away.

Kucera is looking forward to playoffs and has confidence in what his team can do.

“I think the section’s wide open,” Kucera said. “I think we can compete with anybody. We just gotta play better than we did tonight. I think we’re a lot better team than what we showed tonight and we’ve got to start doing the simple things right.”

No stats were provided by St. Mary’s.

St. Mary’s (5-3, 4-3) begins playoff action on Tuesday against an opponent to be determined.