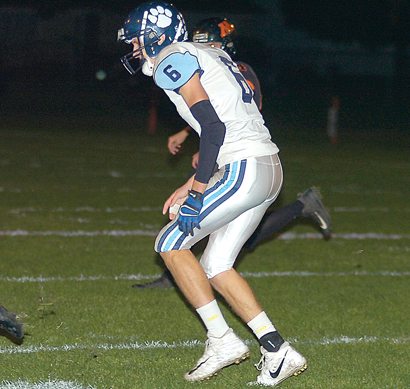 File photo by Steve Muscatello Cedar Mountain/Comfrey’s Dylan Hillesheim is having a big year for the Cougars thus far. Hillesheim has seven touchdowns and 536 yards receiving.

MORGAN — To say that Dylan Hillesheim has played a major role for the Cedar Mountain/Comfrey football team this year would be an understatement.

In what has been a tough season for the Cougars, Hillesheim has been a bright spot and a standout player for the team with his blazing speed and ability to create big plays. The 6-foot-2 senior has taken on a larger role this year compared to last year and he is finding more and more ways to put points on the board as the season progresses.

CM/C coach Dwane Jemmings described Hillesheim as a determined athlete that can find many different ways to make plays.

“His actions speak volumes out there on the field and on the practice field also,” Jemmings said. “He’s a hard-working kid and he constantly wants to get better and make the team better. Every time he touches the ball — you don’t know what to expect. He’s so explosive that anything can happen when he touches the ball.”

Hillesheim was limited to playing in just three games last season after suffering a broken left collarbone in CM/C’s homecoming game against Sleepy Eye. His presence on the field was certainly missed, but this year he has come back stronger and with no signs of slowing down.

Hillesheim caught seven passes last year for 113 yards and a touchdown, while returning six kickoffs for 163 yards, an average of 27.2 yards a return. This year, his numbers have shown an upgrade and have been a major key for his team when it comes to putting points on the board.

Through seven games this year, he has 28 receptions for 536 yards and seven touchdowns, while also adding a rushing touchdown. Hillesheim has also taken 13 kick returns back for 447 yards and three touchdowns on an average of 34.4 yards a return.

Hillesheim credits his quarterback Eli Samuelson for a lot of his success on the field. He also said that he knows what he needs to do and when he needs to do it.

“I’ve got a great quarterback,” Hillesheim said. “Me and him have got a good connection and we talk a lot. And sports just kind of come to me, so I know what to do and in the nick of time.”

Hillesheim added that he doesn’t let the idea of being a go-to guy put pressure on him. He said he uses it as motivation, especially when he’s up against double coverage.

“Every team that we play — they always double team me,” Hillesheim said. “They have one guy in front and the safety over the top. That actually just kind of motivates me and tells me that I’m a good player and they have to have two guys guard me. It doesn’t really pressure me, it just gives me that motivation.”

“The first year he came out for football was in eighth grade and I was a junior high coach at that time,” Jemmings said. “And the very first game — he only had three practices in — and I think he touched the ball four times and he had four touchdowns. Right there you could just tell that you had something special.

“He’s the athlete he is because he’s driven to be better and he makes his teammates better,” Jemmings said. “And he’s a good teammate to have around.”

Hillesheim is all about helping his team win, something he helped the Cougars do on Oct. 6 against Granada-Huntley-East Chain/Truman in their first win of the season. And despite the Cougars suffering a narrow 48-44 defeat at the hands of Madelia on Oct. 13, Hillesheim is hoping to continue to improve and finish the final regular season game this year against West Lutheran on a win.