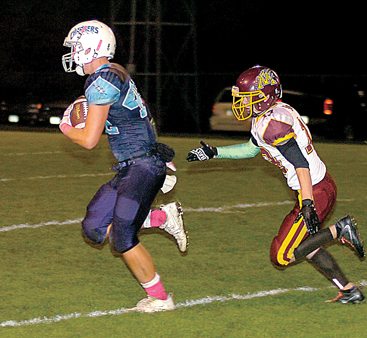 Staff photo by Steve Muscatello Minnesota Valley Lutheran’s Jacob Kiecker gets past Medford’s Javis VonRuden after making a catch in the second half Friday at Johnson field in New Ulm. For more photos of this event go to cu.nujournal.com

MVL spotted Medford a 20-0 lead nine minutes into the first quarter and went on to lose its seventh straight game of the season 29-14.

Willie VonRuden caught a pair of 50-yard touchdown passes from Javis VonRuden and added a 45-yard scoring pass with Nate Meixner scoring on a 4-yard run for the Tigers.

Matt Munsen and Colton Collum scored the Chargers’ touchdowns on runs of 3 and 11 yards respectively.

“Honest to goodness, we started flat,” Buboltz said. “We gave up momentum and I said that the key to this game was how we were going to start.”

And it was not the start that Buboltz wanted.

On MVL’s second play of the game, it fumbled and Medford recovered at midfield

On the Tigers’ first play, Javis VonRuden found Willie VonRuden all by himself for a 50-yard touchdown at the 10:53 mark.

On Medford’s next offensive series, the Tigers marched 69 yards in seven plays ending when Meixner pinballed off MVL tacklers for a 4-yard touchdown run and a 12-0 lead at the 6:29 mark.

The final dart from Medford came three minutes later when the combination of VonRuden and VonRuden hooked up for a 45-yard scoring pass and a 20-0 lead with just over four minutes left in the first quarter.

“We self-imploded constantly,” Buboltz said. “I don’t understand it. In order to play this game it is communication, listening and trusting in what we are doing. And until we there it is going to be a longer year.”

MVL cut the lead to 20-6 early in the second quarter on a Munsen 3-yard run before the Tigers upped the lead to 26-6 on another VonRuden to VonRuden 50-yard pass and run.

A Javis VonRuden field goal had Medford up 29-6 at halftime.

Collum’s 11-yard touchdown run was the lone score of the second half.

For the game, Munsen passed for 147 yards for the Chargers.

“Getting down 20 points and the way that we got down by giving them the ball, you need to make them earn it,” Buboltz said. “Our guys have to understand that when we start the game.”