Madelia wins a shootout with CM/C 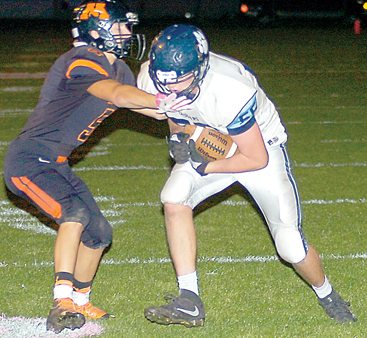 Staff photo by Steve Muscatello Cedar Mountain/Comfrey’s Dain Dallenbach gets int the end zone past Madelia’s Nick Cholors after making a catch in the second quarter Friday in Madelia. For more photos of this event go to cu.nujournal.com

Anderson had 28 carries for 201 yards and five touchdowns. He also threw for two touchdowns.

Anderson’s first touchdown came on a 5-yard run. The Blackhawks got two points on a run for an 8-0 lead.

Anderson threw a 15-yard pass and he ran for a two-point conversion to boost Madelia’s lead to 16-6 after the first quarter.

Anderson struck paydirt on a 2-yard run. He threw a pass to get Madelia two more points and a 24-14 ballgame.

Anderson scampered 15 yards for Madelia’s next score to give Madelia a 32-22 lead after the 2-point conversion.

Madelia got its final touchdown of the half on a 50-yard pass by Anderson. Anderson’s run for the 2-point conversion gave Madelia a 40-22 halftime advantage.

With 6:24 left in the third quarter, Anderson scored from 3 yards out and Hennis ran in for the two points to put Madelia ahead 48-22.

Samuelson hit Schacher for a 16-yard touchdown pass for CM/C. Samuelson threw to Forbrook for two points closing the gap to 48-38 for Madelia.

With 24.8 seconds left in the game, Hillesheim raced 82 yards for a CM/C touchdown.

There weren’t any statistics available for CM/C.