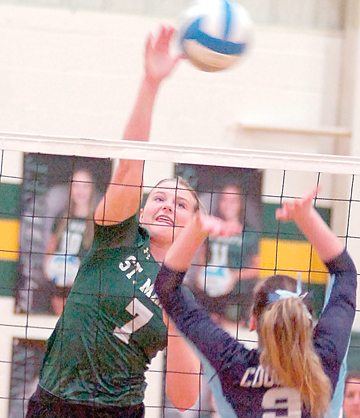 SLEEPY EYE — Cedar Mountain/Comfrey picked up an important 3-1 win over Sleepy Eye St. Mary’s on Thursday in what was the final Tomahawk Conference volleyball match this season for both teams.

CM/C coach Beth Hill realized the importance of the conference win and its potential impact on playoff seedings, but still remains focused on the rest of the regular season.

“It definitely should help us get the seed that we think we should get for playoffs,” Hill said. “But ultimately we’re just taking it one game at a time and we’re focused on ourselves and seeing what we’re able to do.”

Back-to-back kills by Beltz ended the first set with a win for the Knights.

St. Mary’s put together a brief 3-0 run near the end of the set before a Bock kill gave the Cougars the win in Set 2.

The Knights led 8-6 early on in Set 3, but the Cougars went on an impressive 19-3 run to close out the third set on a win.

With the Knights ahead 6-5 in the fourth set, Lexi Toll tied things up with a kill. The Cougars then took a 10-7 lead to force a Knights’ timeout. Shortly after the timeout, CM/C’s Kylie Wersal picked up her 1,000th career dig.

The Cougars continued to force tough digs back-and-forth between the two teams until winning the final set and match on a Knights’ hitting error.

Knights coach Jen Walter said that she thought there was a little added pressure on her team before the game and knew how tough it was going to be.

“We’ve talked about it — we knew this was a good team,” Walter said. “We obviously pay attention to rankings and standings. We wanted to be that conference runner-up and we wanted that spot.

“I thought we played a little tight in Set 1, even though we came out with a win.” Walter said. “I think maybe they did a little bit too. I was just trying to get them to loosen up and play a little more confident, but it was an up-hill battle for sure.”

The Knights were led by Beltz with 17 kills and 21 digs, while Cassie Heinrichs added 12 kills. Sarah Reinarts and Dani Weiss 18 and 17 digs respectively for the Knights.

Kelsie Kosak and Mallory Helget had 15 and 12 digs respectively also for St. Mary’s.

Jody Hansen had 38 set assists and 28 digs. Hansen also passed 2,000 career set assists over the weekend for the Knights.

Makenzie Kerkhoff led the Cougars with 20 kills, followed by Bock with 16 kills. Wersal led the team in digs with 40, while Kerkhoff and Abby Jemmings added 20 each.