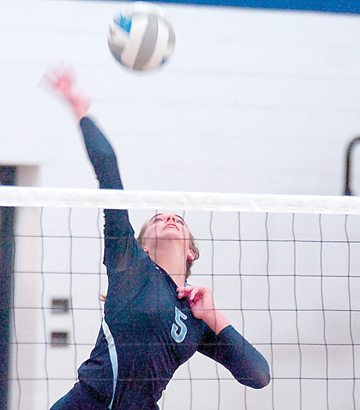 The Chargers grabbed an early 3-2 lead in the fifth set. BLHS tied it up before gaining its first lead 4-3. The Mustangs would not give up the lead as they kept MVL at bay. MVL knocked the ball out of bounds for the set point and match win.

MVL refused to die as it kept fighting back and getting points when necessary. BLHS held its composure and secured the win.

“Both teams really played good defense,” MVL head coach Sara Gieseke said. “It was a fun match, and it was intense from start to finish.”

Gieseke said her team lost momentum and it took time to regain it. The offense wasn’t consistent, but MVL didn’t have enough at the end to win.

MVL started well by persistently playing even with BLHS in the first set. There were three ties and two lead changes. MVL held a 23-17 lead after BLHS scored four points before MVL got the final point.

Neither team could get an edge in set 2. BLHS gained momentum down the stretch to win the set. There were four lead changes and five ties in the set. MVL hit the ball out of bounds for BLHS’s set winning point.

The Mustangs jumped out to a 10-4 advantage in the third set. MVL closed the gap within three points using some good blocks at the net. BLHS held on and won set three.

MVL appeared to have taken control of the match when it won set four. Things were close in the early stages, but MVL scored the last four points to force the fifth set.