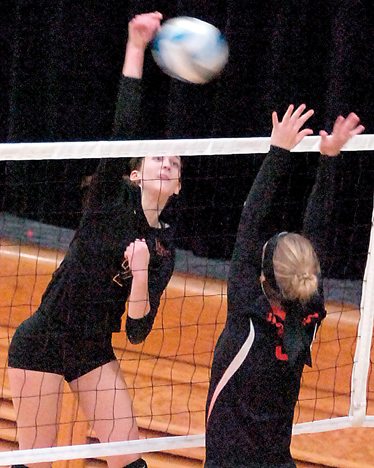 Staff photo by Steve Muscatello Wabasso’s Gina Goblirsch spikes the ball as Mariah Miller of Sleepy Eye attempts to block it Tuesday in Sleepy Eye. For more photos of this event go to cu.nujournal.com

Maddy Guetter had 22 kills and 13 digs to lead the Rabbits. Gina Goblirsch had 12 kills and Jenna Frank had 35 set assists.

Sleepy Eye was led by Mya Ibberson, who had 10 kills and 3 blocks. Maddie Krueger had 13 digs.

Sleepy Eye (8-11) is at New Ulm Cathedral on Thursday.

Sarah Longtin had 16 digs and Izzie Wolkow had 10 set assists. Madeline Gag had 4 kills and 3 blocks and Ellie Bute had 5 set assists for the Eagles.

New Ulm drops to 2-18 on the season with the loss.

SESM will host Cedar Mountain/Comfrey on Thursday. BLHS will travel to Minnesota Valley Lutheran on Thursday.

MANKATO — Mankato East defeated New Ulm on Tuesday in the first round of the Section 2A girls’ soccer tournament.

The Eagles had seven shots on goal to East’s 12. New Ulm goalkeeper Caleigh Heck had 11 saves.