Ries on the move to Canada to play hockey 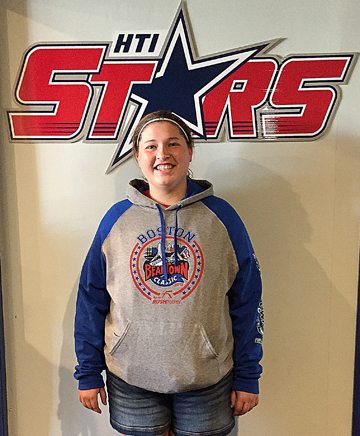 Submitted photo New Ulm High School girls’ hockey goalie Karlie Ries will not be returning to the Eagles for her senior year and instead will by playing this season for the Hockey Training Institute in Ontario, Canada.

NEW ULM — While high school hockey practice for girls does not start until October 30 here in Minnesota, Karlie Ries has already started her hockey season.

But not for her senior season as a goalie for the New Ulm High School Eagles.

Ries, a Sleepy Eye native, will be playing this season for the Hockey Training Institute located in Mulmur, Ontario, Canada.

In fact, Ries has already started play for HTI.

This past weekend, her team played in the Cornwall ALS Shootout in Cornwall, Ontario.

“We took second place out of 16 teams,” said Ries, who had a shutout with 24 saves in the first game win before giving up two power play goals in a 2-0 loss in the title gane to Ontario Hockey Academy on Sunday.

So how did Ries get go from playing high school hockey in New Ulm to Ontario 965 miles away?

“They invited me to a summer camp in July and I decided to take them up on that,” she said. “I was here for three weeks and we played in a tournament in Boston. And from that camp they asked me to come back for their winter program season. I had a lot of fun and I decided it was too good of an opportunity to pass up.”

It was a decision that Ries struggled with before making the decision to not come back for her senior season with the Eagles.

“It was very difficult,” Ries said. “I really weighed the options and the pros and cons. I definitely am missing them right now — Homecoming is coming up and the hockey season starts soon. But this was something that I thought that I needed to do.”

She said that one of the deciding factors that swung her decision to make the change was the training.

“I wanted to grow as a person and my dad [Bill] did play junior hockey in Canada when he was my age and he had a great experience that I felt I wanted to do that to,” she said.

Her father said that he and his wife Julie are going to go for three or four weekends to watch her play.

“She will come home at Christmas for two weeks from the middle of December until early January,” he said. “We are also going out to Buffalo, New York on November 2 for a tournament.”

Another factor was more exposure to college coaches.

“I am getting looked at out here,” she said. “There are a lot more colleges on the east coast and that is where I am playing. That was another big reason.There are a lot of D-III and D-I colleges. We play the entire east coast — we’ll be in Boston to New Hampshire to Pittsburgh to New York. We just got back from Maine.”

She also said that all of the players for HTI “are all about hockey. There are not many outside things that they are focused on other than hockey — they are all about hockey 24/7, playing and working out. We practice every day and it is fun. When you have a bunch of girls who know that this is what they want to do. Everyone wants to be the best hockey player they can be. It makes it a lot easier. We play between 50-60 games a season.”

Ries also had to get used to living in a dorm with the other players.

“We have the whole team living together and doing everything together,” she said.

While she is in Ontario, she is doing an independent study through the Sleepy Eye School District.

“I am still a student enrolled in Sleepy Eye High School. I will come into classes in March so I can graduate with my class.”