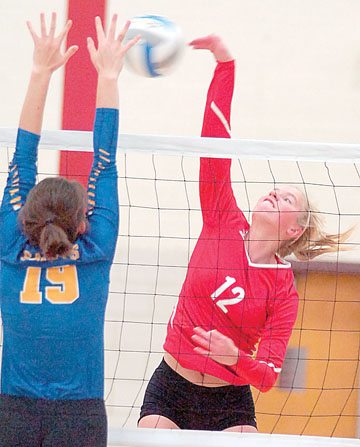 Staff photo by Steve Muscatello Martin Luther College’s Moriah Hackbarth spikes the ball during the first set of the Knight’s match against St. Scholastica Saturday at MLC in New Ulm. For more photos of this event go to cu.nujournal.com

NEW ULM — Despite a balanced attack from Martin Luther College, St. Scholastica picked up a 3-2 win over the Knights on Saturday in Upper Midwest Athletic Conference volleyball action.

The Knights had four players with double digit kills on the day, led by Kira Grev and Jade St. Germaine with 16 each. Moriah Hackbarth added 12 kills, while Rylee Weisensel had 11.

Grev also had 19 digs for the Knights, while Taylor Weber had 20. Hailey Stade led the Knights in set assists with 35, while Emily Byhardt had 26.

Weisensel said that despite the loss, she thought that the team fought hard until the end.

“I think we played really well,” Weisensel said. “We didn’t just give up and let them take over the game. I think we fought hard and we had some really good plays as well.”

The tiresome first set had several late lead changes. After a Hackbarth kill to tie things up at 17-apiece, the Saints took the lead back right after on an attack error. With the Saints up 24-22, the Knights tied things up at 24-24 on a Grev kill to force a Saints’ timeout.

The lead changed hands five more times after that and the Saints came out on top after one set.

The Knights hung on to win Set 2, however, and took a do-or-die win away in Set 4 after dropping a close Set 3. Set 5 was tied up at 7-7 after a Grev kill, but the Saints took 3 points in a row to force a Knights’ timeout.

The Knights inched closer and brought their deficit to 10-9 out of the timeout, but couldn’t pull any closer and fell in the final set.

The Knights next play at North Central on Tuesday.