Blizzard slide by Steel 5-4 in OT 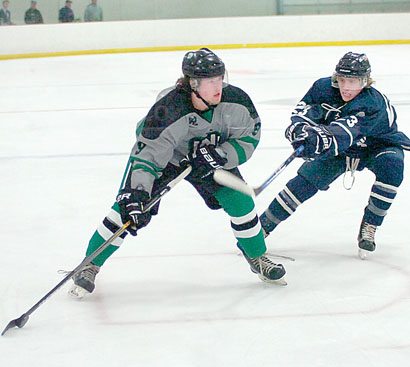 Staff photo by Steve Muscatello Alec Moser of the New Ulm Steel tries to move the puck despite pressure from an Alexandria player during the first period Saturday at the New Ulm Civic Center. For more photos of this event go to cu.nujournal.com

It was the third straight loss by the Steel in an extra session this season.

“I just told the team that I was proud of them for getting that point — however at the end of the day we need to be better,” Steel coach Andrew Kolb said.

The Steel had to battle back all game as they fell behind 2-0 on goals from Marco and Roen Josiah coming less than two minutes apart before Bayler Kraus netted the first Steel goal off an assist from Brandon Mehlhop.

“They scored two quick goals on four shots,” Kolb said. “The first goal was a four-on-four situation and we lost our man and the second they scored when we were on the power play.”

Alexandria increased that lead to 3-1 in the second period on an Alec Skar goal at the 7:46 mark.

But the Steel’s Kirk Coppock scored his team-leading fifth goal when he bounced a shot off of the crossbar that bounced by Blizzard goalie Brady Meyers at the 15:21 mark as the Steel cut the lead to 3-2 going into the final period.

But in the third. the Blizzard’s Carey David put the Blizzard back up 4-2 at the 6:29 mark.

However, New Ulm rallied to tie the game on a power play goal from Tom Reilly at the 14:03 mark and Parks first goal of the season at the 15:48 mark.

“Late in that third period we were down by two goals and we woke up,” Kolb said. “Why with seven minutes left are we finally waking up? We need to have that consistency all three periods.

“We need important guys to be a lot better. It is the simple stuff that seperates a win from a loss.”