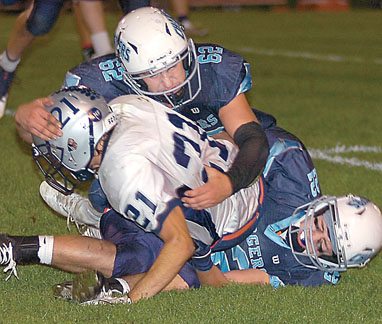 The Rebels were dominant on the defensive side of the ball, forcing four Charger turnovers as the Rebels won 25-8 at Johnson Field.

The Rebels sent a message immediately on offense when they scored on the second play from scrimmage. Roel Perales broke loose for a 37-yard touchdown to give the Rebels a 6-0 lead. But after that, the Chargers held their own until halftime where they trailed by the same score.

“I just want to see a more consistent effort, I was very happy with our first quarter, I mean the first play was a breakdown and after that I think we allowed two first downs the whole first half,” MVL coach Jim Buboltz said. “We just gotta see more consistency all around, whether it be our offensive line or our defense, for the defensive side we just ran out of gas at the end.”

Meanwhile, the Chargers were unable to get much going offensively. Quarterback Matt Munsen was picked off once in the second quarter and two more times in the second half. MVL also had a fumble that was recovered by USC.

Overall, it was tough to get any rhythm on the offensive side of the ball.

“They’re fast, it’s a speed team and they showed their speed especially in the second half,” Buboltz said.

USC started to break the game open in the second half. Derek Christiansen broke a 28-yard touchdown on the quarterback keeper with 6:51 left in the third to put the Rebels up 12-0.

Later, Zach Niebuhr got free and took off for a 55-yard touchdown run and USC led 19-0 at the end of the third quarter.

MVL started the fourth quarter out by throwing an interception and then had a fumble recovered by USC. That fumble recovery led to USC’s fourth touchdown of the game, 2-yard dive by Perales to make it 25-0.

Munsen scored MVL’s lone touchdown on a keeper with 1:25 left in the game and Colton Collum scored the 2-point conversion for the final 25-8 margin.

MVL (0-5) is at Janesville-Waldorf-Pemberton on Friday.