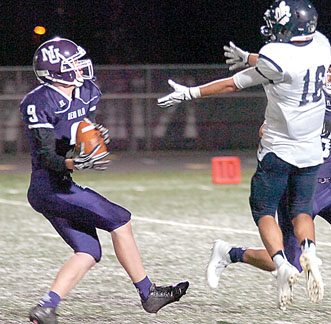 The Eagles then sealed the win when Luke Scheid picked off Olson with less than a minute to go in the contest.

Hunter Ranweiler passed for four touchdowns in the game, connecting on scoring strikes of 29 yards to Scheid, twice to Connor Foley on strikes of 5 and 10 yards and a 6-yard strike to Braden Zimmerman.

“Give credit to Taylor and Luke,” said New Ulm coach Corey Kneeshaw, who saw his team improve to 3-2 on the year and remain unbeaten at home. “They really stepped up.”

The game went back and forth as New Ulm and St.Peter exchanged scores before St. Peter took a 27-20 lead at the 9:40 mark of the fourth quarter.

Ranweiler then tied the game with his fourth touchdown pass.

New Ulm then took a 29-27 lead on a safety when the ball went into the end zone and was recovered by the St.Peter punter for two points for the Eagles.

New Ulm is at Belle Plaine on Friday.