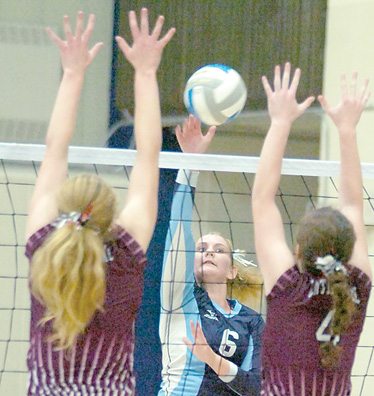 MORGAN — Cedar Mountain/Comfrey continued to roll after picking up its sixth win in a row on Thursday.

The Cougars (10-2, 4-1 Tomahawk) and Greyhounds (11-8, 2-4) each had their share of ups and downs and both head coaches shared similar thoughts after the game.

“At times we played really well,” Wilfahrt said. “When we were aggressive, when we went after them serving and hitting, we were the better team. And then all of the sudden we tried to play a little bit safer and made a lot of errors. You saw that — a lot of hitting errors again. We’ve been talking about that all season. We had 35 tonight and again, in close games that makes a difference.”

Cougars coach Beth Hill said that although she wished for a little more consistency from her squad, she was happy with the result at the end of the day.

“We had a lot of ups and downs,” Hill said. “Overall it was a good finish. We pushed through some of our difficulties and I give New Ulm [Cathedral] a lot of credit. They worked hard and they got momentum and when they had the momentum, they played really well.”

CM/C got the crucial win in Set 5 after fighting the relentless Greyhounds throughout the first four sets. After a kill by Makenzie Kerkhoff gave the Cougars a 4-1 lead in Set 5, Cathedral used a timeout.

A 10-6 Cougars lead prompted another timeout by Cathedral. The Greyhounds were unable to stop the Cougars out of the timeout, though, as CM/C closed out the key set on a 5-0 run.

The Greyhounds made the Cougars work overtime to pick up their eventual win, though, taking Sets 1 and 4. Cathedral came back after trailing by 9 in Set 1 and 8 in Set 4.

The Greyhounds also created a scare for the Cougars in Set 2 after trailing 24-18. They fought back to trail 24-23 before the Cougars escaped with the win.

Set 3 was all Cougars as they built a 16-4 lead to force a Greyhounds’ timeout. A kill by Rose Hazuka put the Greyhounds down 23-10, but back-to-back hitting errors by Cathedral gave the Cougars the third set win.

Kylie Wersal and Jordan Kevelin led the Cougars with 53 and 40 digs respectively. Kerkhoff had 16 kills, while Erica Bock added 14. Abby Jemmings had 43 set assists and four kills for CM/C.